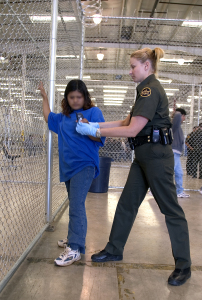 In the six years since the inception of the Obama administration’s detention reform initiative in 2009, the number of immigrant detainees per year has risen to more than 400,000, the administration has opened immense new family detention centers, and the overwhelming majority of persons in the custody of the Department of Homeland Security (DHS) have remained in prisons, jails and other secure facilities where they are subject to standards designed for criminal defendants and, in many ways, treated more harshly than criminals. The United States Conference of Catholic Bishops recently released a report, Unlocking Human Dignity: A Plan to Transform the U.S. Immigrant Detention System, which functions as a response to the ever growing immigrant detention system and includes a number of recommendations to make it more humane. The report’s overarching recommendation is that the U.S. immigration detention system be dismantled and replaced with an alternatives to detention (ATD) program that uses a network of supervised release, case management and community support programs, designed to ensure court appearances. Highlighting the contrast between the current system and this new approach, Bishop Nicholas DiMarzio of Brooklyn, NY noted that “there are ways to create a humane system and also ensure that immigrants are complying with the law, but we have created a detention industry in this country which preys upon the vulnerability of our fellow human beings, the vast majority of whom are not criminals.” Among other benefits, an alternative to detention system is both more humane and more cost effective than the correctional, national security focused system currently in place. Alternatives to Detention programs respect human dignity better than does the current detention paradigm: Unauthorized migrants apprehended by the Customs and Border Patrol (CBP) are placed into Immigration and Customs Enforcement (ICE) custody and are remanded to prison-like systems that is based on a correctional, criminal, and national security paradigm. Maintaining a system that relies on mandatory detention and does not take into account an individualized determination of flight risk and danger should be eliminated. For example, pregnant and nursing women, asylum-seekers (particularly those determined to have a credible fear of persecution), the very ill, the disabled, the elderly, immigrant families, and other vulnerable persons should not be detained but should be placed in an alternative to detention system that allows them to remain in contact with their family and avoid the psychological and at times physical trauma that accompanies life in prison based systems. Alternative to Detention programs are more cost effective than the current detention paradigm: The average immigration detention bed cost $158 per night in FY 2013, compared to $10.55 for the average daily cost of ATD programs. Between FY 2011 and 2013, the full service ATD program yielded an appearance rate of 99 percent at court hearings and 95 percent at scheduled final removal hearings. In short, ATD programs when properly funded and implemented can provide a relatively inexpensive method to ensure court appearances, while at the same time avoiding detaining these migrants in prison like structures that degrade human dignity. What can you do? Our biblical tradition calls us to love, act justly toward, and identify with persons on the margins of society, including newcomers and imprisoned persons. Please take a moment to read the report so that you can better understand the conditions confronting migrants who are trapped in prison-like settings. Educate your friends, family, and neighbors the conditions confronting detained migrants and alternatives that are available. Contact your Congresspersons and urge them to support measures that will decrease our dependence on private prison systems for the detention of migrants and move to an alternatives to detention model that simultaneously respects human dignity and ensures that migrants comply with the law as they wait for their judicial process to proceed forward.