I Am Ready for “San Romero” 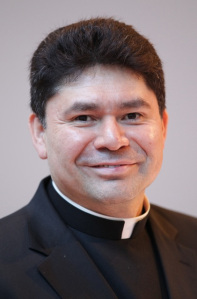 I am ready for “San Romero” or Saint Oscar Romero of the Americas, who was recently beatified, why? Having visited the tomb of the now Blessed Oscar Romero in El Salvador many times, one can only wonder why people from all over the world – and from all corners of the tiny country of El Salvador – pay respects there, and pray for his intercession. Why do powerful people visit his tomb and speak of what Romero means for the poor? More importantly, why is it that the poor also go visit his tomb and feel as if Romero is still walking with them, speaking for them, and interceding for them? Romero interceded for them in life, and now in heaven. It seems to me that the Catholic doctrine of “sensus fidei,” or “sense of faith," applies here. As the preparations for the beatification of Archbishop Romero were underway, people tried to explain the meaning and process of beatification, as well as of canonization, or sainthood. Yet, for many, Romero already is and, for a long time, has been a saint. On Facebook, on the day of the beatification, someone I know wrote “Viva San Romero de America!” or “Long Live Saint Romero of the Americas!” and asked others to refrain from explaining that Romero is not a saint yet, only a blessed.  “While there is still a ways to go before Romero is ‘officially’ recognized as a saint,” the person said, “to a lot of people, he is already a saint!” Perhaps there is a kernel of truth in this. And that is why “sensus fidelium” (another use of the same term) applies here. I will not go into the details of how a first miracle can be dispensed when someone is declared a martyr, or how a second miracle needs to be proved and ascribed to that person to be named a saint and thus “canonized.” Even better, I will not go into how a pope (Saint John Paul II having done this himself) can even dispense from that second miracle and declare a person a saint. My point is simpler. In the primitive church, the saints, particularly martyrs, were recognized as saints because of people’s devotion for them.  The catacombs in the Roman Empire  are filled with the remains of martyrs who died for their faith, people would go visit them and pray to them. This reminds me why people come to the “catacomb” at the crypt of the Metropolitan Cathedral of San Salvador, to visit the remains of San Oscar Romero, the martyr. Romero died because, as Cardinal Angelo Amato said in the beatification homily, “His option for the poor was evangelical, not ideological.” The archbishop martyr died out of love for his people, and his people recognized his heroic acts. We must wait for the process of the canonization of Blessed Oscar Romero. Yet, the Catechism of the Catholic Church says, in No. 92 and again in No. 785, that "The whole body of the faithful. . . cannot err in matters of belief. This characteristic is shown in the supernatural appreciation of faith (sensus fidei) on the part of the whole people, when, from the bishops to the last of the faithful, they manifest a universal consent in matters of faith and morals." At the beatification Mass of Archbishop Oscar Romero, one could see the mix of faithful who attended. There were the humble who admired what was happening before them, and others perhaps more knowledgeable of the process, who also rejoiced in the event. There were also bishops ascertaining and witnessing the historic event. Such, it seems to me, is the sensus fidelium. I am ready for Saint Oscar Romero, I am ready to celebrate once again the faith of the people who proclaim that a prophet arose in the midst of a suffering country and spoke the words of the Gospel. I know I probably have to wait for a miracle before that happens, but I am ready! Fr. Juan Molina is Associate Director for the USCCB Office of National Collections and Director for the Church in Latin America.