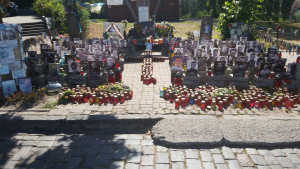 Maidan is the busy, central square of Kyiv, the capital of Ukraine.  It is also a place of solemn remembrance.

On a sunny day recently, I walked the length of Maidan.  The day was bright, but shadows of loss were also evident.  Small personal shrines honoring the “Heavenly Hundred” lined the square.  They had died in the Maidan protests of early 2014.  The shrines included pictures, flowers, candles and often rosaries or crosses. Maidan was not just a political protest; it was a prayerful event in which people of faith sought human dignity.  More than 100 protestors were killed in connection with the Maidan demonstrations.  Most of them were young.  The Church and people of Ukraine continue to honor their sacrifice, especially as they face conflict fomented by Russia in the eastern part of their nation. Archbishop Malchuk, Bishop of Kyiv-Zhytomyr, told our U.S. Conference of Catholic Bishops (USCCB) delegation that half of his Cathedral was turned into a hospital during the Maidan demonstrations.  He noted that prayers were regularly offered from the central Maidan stage and participation was multi-confessional.  Maidan’s quest for freedom and dignity brought people of diverse religions and ethnicities together as people, as Ukrainians. Archbishop Joseph Kurtz and Archbishop Blase Cupich, the leaders of our USCCB delegation, consistently reminded the leaders and people of the Church in Ukraine that we are in solidarity with them.  Having just celebrated our own Independence Day on the Fourth of July, I am reminded the Maidan is literally Ukraine’s “Independence Square.” We visited a military hospital where Ukrainian Greek Catholic priests, many expelled from Crimea and the occupied areas in Donetsk and Luhansk, minister to the wounded and their families.  One man had lost an arm and thanks to the intervention of our Archbishops with the U.S. Embassy is now headed to Chicago for medical treatment and an advanced prosthetic.

The experience of Ukraine was too rich to be captured in a short blog, so let me summarize what I learned. 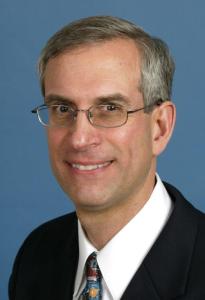