National Migration Week 2016: “A Stranger and You Welcomed Me” 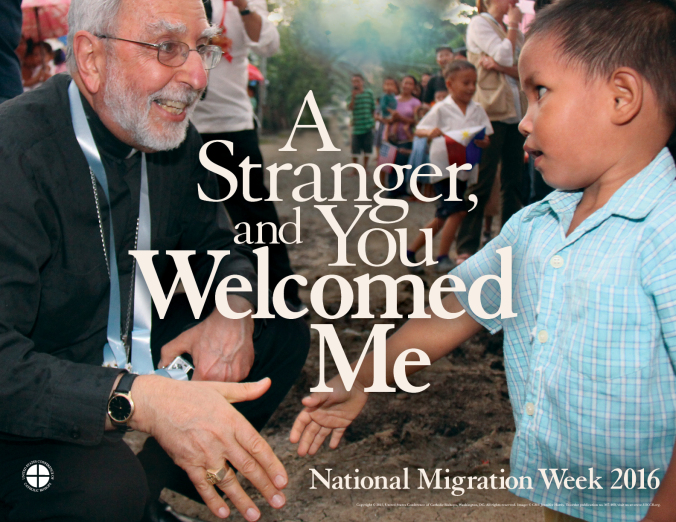 The call to welcome the stranger plays an important role in the lives of faithful Christians and holds central place for those of us who work in the migration field. The migrant, who moves from one country to another, is truly a stranger in our midst. Often unfamiliar with the local tongue of the new country, not to mention its customs, the migrant needs the support of local communities so that she can better adjust to her new surroundings. National Migration Week 2016 picks up on the theme of welcome and, in doing so, calls on each of us to welcome the stranger among us.

Sadly, every year seems to bring a new migration crisis to the forefront.

In 2014, the United States witnessed a significant influx of unaccompanied migrant children and families fleeing violence in their homelands. Most of these migrants came from El Salvador, Guatemala, or Honduras. The Catholic Church has taken seriously the humanitarian and policy oriented aspects of this situation and advocates in support of increased protections for migrant children and their families who are arriving in the United States.

In 2015, the Syrian refugee crisis took center stage. Since its outbreak, at least four million Syrians have fled their country as a consequence of the civil war and the rise of ISIS. Most have fled to surrounding countries, especially Egypt, Lebanon, Jordan, and Turkey. Many others have moved on to Europe with the hope of finding a place of peace and safety. Pope Francis and the Catholic bishops have called on the U.S. government and the international community to provide support to both Syrian refugees fleeing violence and to countries that have been at the forefront of this humanitarian effort. In a related statement, Archbishop Joseph Kurtz of Louisville, Kentucky, and President of the United States Conference of Catholic Bishops urged:

… all Catholics in the United States and others of good will to express openness and welcome to these refugees, who are escaping desperate situations in order to survive. Regardless of their religious affiliation or national origin, these refugees are all human persons—made in the image of God, bearing inherent dignity, and deserving our respect and care and protection by law from persecution.

In both the unaccompanied migrant child and Syrian refugee crises, the Catholic Church’s call to provide protections and support for these vulnerable people has often gone unheeded and has been instead met by demands to implement further restrictions on migration to the United States. In the case of Syrians, suggestions have been made to ban Muslim migrants from entering the United States altogether.

In the case of unaccompanied children, legislative efforts were undertaken to limit their international protections.

The Catholic bishops neither support a policy of open borders nor a process of unregulated migration from one country to another. Rather, they continue to defend the duties of the international community to implement internationally agreed upon protections that are due to vulnerable migrants, and to call upon world leaders to provide a place of welcome, wherever possible, to those who are fleeing an impossible situation.

This position is rooted in the Gospel, and concretely in Matthew 25: “I was a stranger and you welcomed me.”