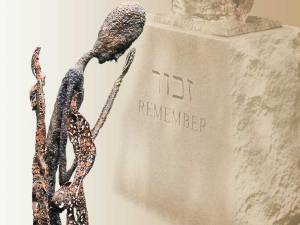 Image of Rachel Weeping statue and base at the Holocaust Memorial in Richmond, VA

Years ago when I served in Richmond, I had a view of a Holocaust Memorial on the grounds of the Cathedral outside my office window. It depicted Rachael weeping for her children amidst flames.  On the base there was a single word carved in Hebrew and English, “Remember.”  It is indeed important for humanity to “remember” this singularly heinous event in human history.  It is important for us to “remember” people wherever and whenever they suffer.

I recently returned from a visit to Israel and the occupied West Bank and Gaza. Israel and the Palestinian Territories are tense places these days.  Israelis fear random knife attacks; Palestinians fear the harsh realities of occupation and the lack of freedom of movement.

I accompanied bishops from Europe, Canada, South Africa, and the United States on this solidarity visit. Our Conference of Bishops was represented by Bishop Oscar Cantú, Chairman of the Committee on International Justice and Peace.  At the conclusion of the visit the bishops issued a statement entitled, “You Are Not Forgotten.”  For me, one of its most poignant lines was:

“To those Israelis and Palestinians who seek peace, you are not forgotten. The right of Israel to live in security is clear, but the continuing occupation eats away at the soul of both occupier and occupied. Political leaders across the world must put greater energy into a diplomatic solution to end nearly 50 years of occupation and resolve the ongoing conflict so the two peoples and three faiths can live together in justice and peace.”

We cannot and must not forget Israelis and Palestinians who yearn for peace, especially at a time of heightened fears on both sides. There are people of good will on both sides who support a two-state solution to the longstanding conflict; they support a secure and recognized Israel living in peace alongside a viable and independent Palestinian state.

I was particularly moved by my visit to Gaza. Gaza is surrounded by a concrete wall and watch towers.  One enters Gaza through an imposing security apparatus. Then you walk through a caged walkway for a kilometer through “no man’s land.”  On my way in I saw a man with a donkey cart gathering bits of concrete and twisted iron rods to use in rebuilding. I worried for his safety. 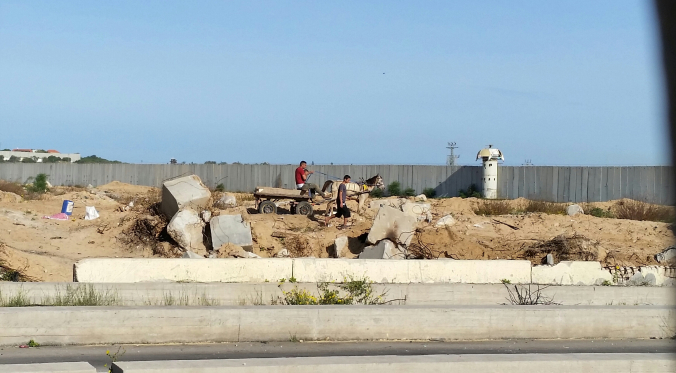 Man in Gaza with donkey cart in “no man’s land” gathers bits of concrete and iron rods[/caption] We were welcomed at Holy Family Catholic Church and celebrated Mass there. Most people don’t think about Christians when they think of Gaza, but there is a small and vital Christian community in Gaza.  There are several Catholic schools where Muslims and Christians study and play together, and there are numerous Christian institutions providing health care, employment, job training, social services, and recreation and trauma programs.  Our own Catholic Relief Services has a number of programs.  I am most proud of their transitional housing effort.  They have built hundreds of small wooden homes to help replace the tens of thousands of concrete homes that were lost in the last war.  The Israelis are no longer allowing the importation of wood, threatening this vital program. 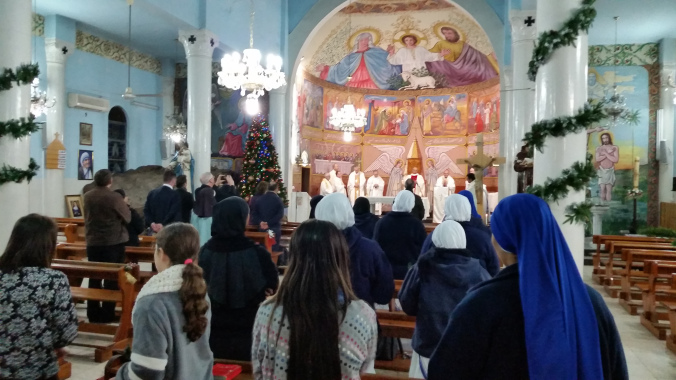 Despite the good work of the Christian community and many others, Gaza remains blockaded and desperately poor with high levels of unemployment. The two million people of Gaza live on a small strip of land about 25 miles long and from 4 to 8 miles wide.  The deep poverty of Gaza is certainly not good for Palestinians, but it is also not good for Israelis.  Desperation does not make for security and stability.  The pastor at Holy Family Parish in Gaza told us: "In this Year of Mercy, one of the acts of mercy is to visit prisoners and I thank you for visiting the largest prison in the world." And so we remember the people of Gaza and the people of Israel, and pray for peace and justice for both peoples.