Wage Theft: A Threat to the Worker and to Economic Development 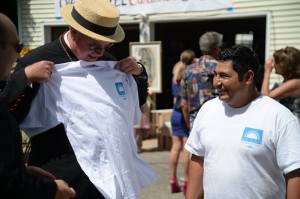 Wage theft is not only an urban problem. Don Bosco Workers began as a parish program at Our Lady of the Rosary Church in Westchester County in 2000. The program was in response to the growing social unrest in Port Chester over “workers on the corners” and the alarming levels of wage theft as a consequence of workers being uninformed and unaffiliated.

A Catholic Campaign for Human Development -- the domestic anti-poverty program of the Catholic bishops of the United States -- grantee beginning in 2006, we incorporated in 2008 including a worker-driven board of directors. Today, we represent more 200 paid members organized as a General Assembly of Workers who decide on how to strengthen the organization through skills training, leadership development, and education.

In September 2014, in collaboration with Communications Workers of America, Local 1103 in Port Chester, we launched a new campaign to address wage theft as a threat not only to the Westchester worker but to economic development throughout the county. No Pay No Way: Wage Theft Is Bad For Business educates the community on how responsible business owners suffer, when other businesses fail to follow labor law. Research shows responsible businesses are simply less competitive because their cost of doing business (paying their workers) is higher.

Just about one year into No Pay No Way, we collaborated with the Attorney General of New York in the prosecution of a local restaurant owner for wage, overtime, and safety violations for five female workers. The employer was sentenced to repayment of $47,000. The women are now thinking about investing their recovered wages in a worker-owned eco-cleaning business.

Last year, we were honored to construct the chair that Pope Francis used when he celebrated Mass at Madison Square Garden. We were called the Pope’s workers, and this continues to inspire our work for justice. When workers are treated fairly according to the law, workers and responsible small business thrive, and there is greater economic development for all.

Gonzalo Cruz is the Director for Don Bosco Workers, Inc.