Say “NO” to Torture 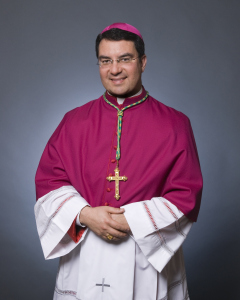 Mention the word “torture” and Abu Ghraib comes to mind. The images of naked detainees cowering as dogs lunge at them make us squirm with shame. But then we think, those were extreme circumstances; the United States doesn’t do this anymore.   Yet we still hear some advocate for waterboarding and “enhanced interrogation techniques” (a euphemism for torture) as a way of extracting information.

In the current environment of fear, we do well to remember Catholic teaching. It tells us that torture is always wrong. In his 1993 encyclical Veritatis Splendor, Saint John Paul II included physical and mental torture in his list of social evils that are “intrinsically evil” (No. 80). The Compendium of the Social Doctrine of the Church says the prohibition against torture “cannot be contravened under any circumstances” (No. 404).

Torture debases a human being and violates the inherent dignity of the human person, both victim and perpetrator, that is instilled by God in every person created in His image. Torture also degrades the moral fiber of any society that tolerates or sponsors it. Accepting torture undermines respect for everyone’s human rights and human dignity.

In addition to the moral arguments against torture, there are practical reasons to oppose this heinous practice. Experienced interrogators tell us that torture doesn’t work. Information gained through torture is generally useless or misleading since the victim will say what he thinks the torturer wants to hear, not the truth.

And knowing that a country practices torture can push those who suffer from it toward violence and extremism. It can even encourage violence in the wider culture. There is no doubt that the images of Abu Ghraib fueled anti-American sentiment in many countries and served as a recruitment tool for terrorists.

Earlier this year, I met an Iraqi refugee now uses a wheelchair as a result of being tortured. His journey from Iraq to safety in Lebanon was arduous. While relatively safe now, he continues to suffer from internal bleeding and needs regular transfusions. But getting medical care is expensive. There’s no money forthcoming from international agencies for anything besides surgery. Nonetheless he might be counted among the lucky ones – he survived torture.

Sometimes the scars of torture are not visible. But if you look into the faces of the victims, you see the shadows that haunt them. You see them avert their eyes when meeting strangers. You see their involuntary flinches at sudden movements. And if you were to look into their hearts, you would see the fear they are trying to overcome and the hope that they are struggling to nurture in order to rebuild their lives.

Abu Ghraib and the torture associated with that name have tainted so many people’s view of the United States. As I said in an interview with Vatican Radio, “We have placed ourselves through our history as a beacon of hope, a beacon of reason, of freedom: and so, this recent chapter in our history has tarnished that.”

It is time for all of us to urge our leaders to firmly acknowledge that torture constitutes a violation of basic moral principles and a betrayal of the U.S. reputation of being a defender of human rights. It is time for us to say “No” to torture.

You can learn more about torture and actions you can take to oppose torture by going to: http://www.usccb.org/issues-and-action/human-life-and-dignity/torture/torture-is-a-moral-issue.cfm http://www.nrcat.org http://www.tassc.org/

Most Reverend Oscar Cantú is the Bishop of Las Cruces and Chairman of the USCCB Committee on International Justice and Peace.