Praying that the Supreme Court Keeps Families Together 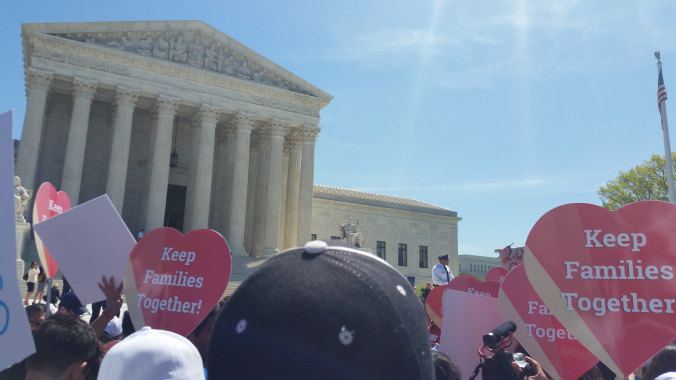 On April 20, 2016, the U.S. Supreme Court heard oral arguments in the case of United States v. Texas.  I stood with thousands of people on the steps of the Court to bear witness on this historic occasion. Inside were colleagues from the Catholic Legal Immigration Network, some of whom camped outside the night before to be among the few granted admission to the courtroom. Also inside were Cardinal McCarrick, a venerable champion of human rights and pastor to people on the margins throughout the world, and six-year-old Sophie Cruz, an indomitable girl who hand-delivered a note about her undocumented parents to Pope Francis during his visit to the United States last September.

People waiting outside the Supreme Court came from all over the country. Many rode buses for several hours, if not longer, so that those who will make this important decision could see the faces of some of the millions of lives at stake. Among the people present, I could see the beautiful diversity of America. People from all faiths and ethnicities united in prayer, chants, and song.

I went to the Supreme Court with members of St. Camillus, a multicultural Catholic parish community in Silver Spring, Maryland. The parish boasts membership of individuals from more than 100 countries speaking dozens of languages. I went as an act of solidarity and faith. I live in a community of immigrants and am descended from Irish immigrants. Census records show that when my family arrived in the late 1800s, girls in my family immigrated alone at the ages of 15 and 16, and the men worked as day laborers. These are the same situations in my community today.

A couple of years ago, my parish priest made a statement about how he ministers to our immigrant community, and that statement has stuck with me over the years. He said that often when he baptizes a baby in our parish — on that joyous day when a child is welcomed into our Church and receives his/her precious first sacrament —he says a silent prayer that the family not be separated.

It is precisely those parents who would benefit from Deferred Action for Parents of Americans (DAPA), one of the programs that the Supreme Court is considering.

This month, the Supreme Court will issue its decision in the case -- a decision that will affect the lives of millions of people in the United States. At issue is the validity of the Obama administration’s executive action and the corresponding guidelines, which would grant deferred action, a form of prosecutorial discretion, to some four million people who have lived in the country for many years and allow them to apply for work permits.

Because of the “substantial humanitarian benefits” that the new programs would offer, USCCB joined with many other faith-based groups in defending the deferred action. As they stated in their amicus curiae brief to the Supreme Court, the programs would provide “important benefits to the most vulnerable in our society, and to those who serve them” and also ensure “that the public will continue to benefit from the substantial contributions of recent immigrants.”

We hope and pray that not only will the administration be allowed to implement the new immigration guidelines, but that this will also be but the first step on to a pathway to greater opportunities for all. We must continue to pray and advocate for a long-term solution. As Pope Francis said in his address to Congress: “Let us help others to grow, as we would like to be helped ourselves. In a word, if we want security, let us give security; if we want life, let us give life; if we want opportunities, let us provide opportunities. The yardstick we use for others will be the yardstick which time will use for us.”

Join with Catholics around the country to urge Justice for Immigrants. Read stories about how communities of faith are standing with their immigrant brothers and sisters: Students Support DREAMers and Immigration Team Fosters Participation and Respect for Human Dignity.