The Sluggish Pursuit of Racial Justice 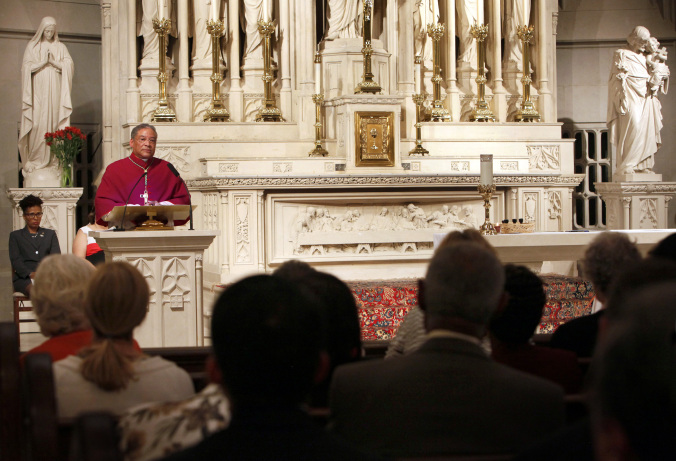 The U.S. Bishops said it back in 1979 with “Brothers And Sisters to Us.”  Their words continue to have a powerful impact in the Catholic community:

“Racism is a sin, a sin that divides the human family, blots out the image of God among specific members of that family and violates the fundamental human dignity of those called to be children of the same Father.  Racism is a sin that says some human beings are inherently superior and others essentially inferior because of race … it mocks the words of Jesus, ‘Treat others the way you would have them treat you.’”

Racial and ethnic strife have remained issues the Church has addressed from the very beginning. Now in our present day, in a climate of ever-expanding freedoms, every Christian is obliged to apply Christ-like critique to personal preferences and judgments in effort to steer clear of seeing others as somehow different.

“They are not like us” is something we hear commonly said.  So, we avoid their neighborhoods.  We avoid social interaction with those people.  We stand from a distance and imagine how bad they are in order to justify our lack of involvement with them.  And ‘because those kinds of people are different, they are not necessarily entitled to, or they don’t deserve, or are not interested in working toward what resourceful and otherwise people like me are entitled to or work for.’

Added to this is the fear of shortages, the fear that we are not treated fairly in comparison to others, the fear of foreigners entering our space.  Regular media reports about the encroachment of refugees and migrants seeking respite from war and conflict, religious or ethnic persecution typically stir fear in people.  While it is a human penchant to differentiate, differentiation acts counter the sensibilities of the Christian message of love of neighbor we received from Jesus Christ.

We look to the Christian template in Acts 2, which inspires mixed class, mixed race and mixed generational communities, and we see that it must translate to our faith communities, as well. Communities in which we would never aspire towards mono-racial parishes because we would recognize they are incomplete, admitting that we are responsible for the application, punctuation and scheduling the universality of God’s kingdom, which is always the higher rubric in the Christian dispensation.

Indeed, the social imperatives found in the gospel are some of the most challenging messages to get across in preaching and Christian formation. It is a genuine struggle getting these ideals across to people, even to sincere Christians.  Material wealth and well-being are deemed manna from heaven. People prefer to live this way - economic advantage and opportunity enable us to live this way. But as positive as advantage, free enterprise and choice are deemed in our democracy, they unwittingly work a divide in the human community.

The City of Chicago is often representative of some of the most glaring disparities in opportunity: housing, education and access to health care.  Disproportionate numbers of people of color live in misery, condemned to lives of desperation, fueled by depression, and crime chosen as a path by anti-social elements in the sub culture.  Adding to the challenge of the Christian task are the people on the other side who easily dispense themselves from indifference and numbness felt in the face of some overwhelming social inequities surrounding us.

Whereas our nation has addressed many legal barriers to ending racism with civil rights legislation, we must continue to be vigilant for we are now challenged to deal with attitudinal and economic barriers to ending racism. The Church’s voice, strong in instances, muted in others, has tried to break through social walls that divide.  We find that people listen and may even nod in the affirmative to what is preached, but certain stubborn social patterns continue.

Christian faith affords us opportunities to reach to the deepest recesses of our hearts to search out attitudes and dispositions and information from our rearing that need discarding if we would live as a redeemed people. For example: ‘From where do my impressions of others originate?  Do I tend to label people or place them in categories?  Do I tend to expect the worse or the best from others regardless who they are?  When are the numbers of minorities close by too many for my comfort level?

What attitudes and approaches are we leaving to the young in legacy so they can help eradicate this original and pernicious sin of our society called racism?

Most Reverend Joseph Perry is an Auxiliary Bishop of Chicago and Episcopal Vicar for Vicariate VI. Bishop Perry is the Diocesan Postulator for the Cause of Canonization of Father Augustus Tolton.

This blog post was adapted for ToGoForth. Read the original version on the Catholic Chicago Blog.

This week, Catholics from all over the country are gathering to pray and learn about what it means to dismantle internalized judgments of our neighbor. The Social Action Summer Institute hosts a number of sessions to help bring about this clarity at Saint Xavier University on July 17-21st. For more information, visit: www.chicagopeaceandjustice.org/SASI. You can also follow the conversation on social media #SASI2016.