A Public Witness for Peace in Our Community 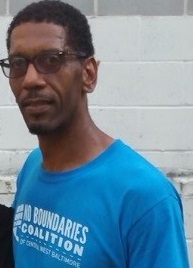 It was already 90 degrees at 9:00 am on this Saturday morning, not the ideal day for a clean-up effort. The forecast was for a heat index of 115 that afternoon. None-the-less, we were on a mission and we had a job to do. I am the Co-Director of a community advocacy group in West Baltimore called the No Boundaries Coalition. We work to break down the boundaries of race, class and neighborhood within the eight diverse neighborhoods that surround Baltimore's (in)famous Pennsylvania Avenue.

Our coalition came about when, after serving in just about every ministry in my parish since birth, St. Peter Claver/Pius V Catholic Church in the Sandtown/Winchester neighborhood of West Baltimore, I realized that while the work we were doing in faith formation, evangelization, and youth outreach was important, it wasn’t necessarily bringing faith into dialogue with the root causes of issues that face our community. And, no one really believed in themselves; our community had lost hope.

Since then, St. Peter Claver/Pius V and the No Boundaries Coalition have worked to break down boundaries and build hope. After the riots which occurred after Freddie Gray’s death, we conducted a listening campaign because in the midst of the media attention, our residents didn't feel heard or felt forgotten. We also created the West Baltimore commUNITY Commission to document instances of police misconduct and published a report that was later used by the Department of Justice in their investigation into policing in Baltimore. Recognizing that one reason our voices weren’t being heard was because of low voter turn-out, we launched a Get out the Vote effort, which we called “Double Up 21217”—which ended up recording the highest voter turnout in the history of polling place 015-018 (Gilmore Elementary School) in Sandtown/Winchester. At the same time, the Archdiocese of Baltimore created the Racial Justice Circle, which facilitated an open conversation about white privilege and systemic oppression. The parishes involved became some of our biggest supporters and volunteers and still are to this day.

Which leads us back to our clean-up effort on a too-hot day in July. By eleven thirty, the heat index was 100 degrees, and we had been through 160 trash bags, but our volunteers, social action team members, and Archdiocese Racial Justice Circle participants were working hard. We were out together, with brooms, shovels, trimmers and mowers, being "visible" and proving we are capable of changing things for the better. When our work was finally complete, we partied together like it was a family reunion. There was music, dancing and so much love in laughter, as we picnicked in a park that a few years ago was surrounded by vacant houses, and near corners that are usually overrun with drug activity. We felt proud that this was our home.

The by-product of all of these efforts is the re-introduction of hope in a community that gave it up decades ago. Once again, the power of God is igniting the power within our hearts and our community.

Ray Kelly is Co-Director of No Boundaries Coalition, in West Baltimore, and a life-long member of St. Peter Claver/Pius V Catholic Church.

Going Deeper Learn more about efforts for peace in West Baltimore, including the work of St. Peter Claver/Pius V with No Boundaries Coalition, and Bishop Madden’s peace walks. Watch this recorded YouTube Live event about how three faith communities, including St. Peter Claver/Pius V, in West Baltimore, are taking action. Visit the USCCB Racism page to find out more about how communities of faith can work together for peace and racial justice.