“Lord, who shall be admitted to your tent and dwell on your holy mountain? He who walks without fault; he who acts with justice…” - Psalm 15:1-2

This past Friday, Monsignor Marvin A. Mottet, diocesan priest for the Diocese of Davenport, died peacefully. He was 86. Monsignor Mottet established the Social Action Office in the Diocese of Davenport in 1969. Later, he served as the National Director of the Campaign for Human Development, which is now known as the Catholic Campaign for Human Development. He was instrumental in incubating four dozen projects which were spun off as autonomous service agencies still active today. He would walk with them to the point that they could do so on their own. 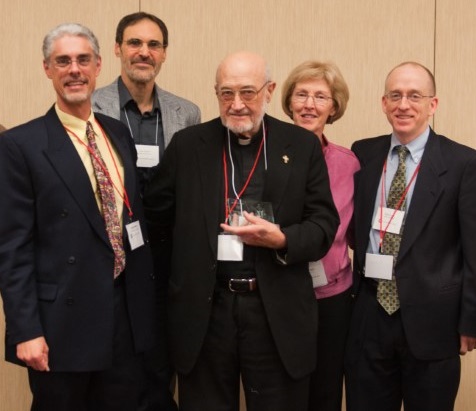 In 2012, Msgr. Mottet received the Servant of Justice Award from the Roundtable Association of Catholic Diocesan Social Action Directors.

For the past seven years, while serving as the Director of Social Action for the Diocese of Davenport, I have benefited greatly from Monsignor Mottet’s wisdom, from his written words and legacy, and from his personal mentoring.

Shortly after beginning, I familiarized myself with The Two Feet of Social Justice, created by Monsignor Mottet, now known by many more in the United States as the Two Feet of Love in Action. I first learned of the combination of charity and justice as Monsignor described and was empowered to share with parishes groups across the diocese. It might seem a simple model, but it is no less powerful. And folks have shown they can go from their experiences of providing for immediate needs to looking at ways to make systemic change.

And Monsignor Mottet supported and encouraged my development as a diocesan director by encouraging me to attend week-long, faith-based community organizer training. He stated his belief that every diocesan director should go through training in order to learn how to affect change, how to empower the disenfranchised, how to teach about power so that it is understood as meaning the ability to affect change. Learning about and in turn teaching others about the benefits of mutual self-interest is at its very core a means of showing dignity and respect to the life of the other, so very necessary in pursuing peace and justice.

Even during his last years, after he was no longer joining us on legislative visits, at rallies and protests, he still attended office team meetings, still wanted to get updates over meals. He continued on with phone calls and emails to elected officials on a variety of justice issues. And most importantly, he supported us and encouraged us on our team.

During his last few days, as people came to visit him, he began to leave each individual with a similar message; as long as you are breathing, use your power and do the work. It was never Monsignor’s work, but rather God’s work walking with both feet towards justice. To honor his legacy, we now continue our walk with his/our Two Feet.

Kent Ferris is Social Action and Catholic Charities Director in the Diocese of Davenport.

Msgr. Marv, Friend of the Poor, Companion to the Oppressed Last week, like many people, I paused, shed a brief tear, offered a prayer, and then found myself with a big smile. So many people were saddened to hear of the death of Msgr. Marv Mottet, my predecessor as Director of the Catholic Campaign for Human Development. I shed a tear at the loss of such a champion for the poor who worked most of his 86 years on behalf of those in need. He was always one with quick wit and charm. But he was also one who would swiftly challenge systems that oppressed and kept poor people down. His embrace of the Gospel was synonymous with his embrace of “the other.” He could not separate the two. Monsignor had a way of correcting, confronting and instructing a person in way that neither demeaned or degraded. I stand as a beneficiary of his strong affirmations and his quick and appropriate admonishments. He had a way of doing both with Christian love. His humility led him to live in Catholic Worker houses and homeless shelters, and to eat at soup kitchens; not because he couldn’t do better but because he placed high value of encountering the poor and looked for creative ways to embrace them and understand their stories. He once shared with me that one of his proudest moments was when he had the audacity to invite Martin Luther King Jr. to receive the Diocese of Davenport’s Pacem in Terris Award. Msgr. Marv, in his humble manner, called up MLK, told him about the award and asked him when he would be arriving in Iowa to receive it. Dr. King, taken aback, told him that despite a busy schedule, he was honored. In a cassette tape Marv shared with me of the award presentation, Dr. King remarked “Who would believe that a Black Baptist minister named Martin Luther would be receiving an award from a Catholic priest?”

Upon hearing of Msgr. Marv’s death, I also had to smile. Just thinking of Marv’s smile, I could not help myself. Smiling within my grief. I recalled the joy he shared and the contagious laughter he so often freely offered. He has been a wonderful gift to me and countless others. I had to smile because I know what has been promised to those who live lives like Msgr. Marv Mottet. Those who care for the poor, those who pursue justice, those who walk humbly. Rest in Peace Msgr. Marvin Mottet, Good and Faithful Servant.

Ralph McCloud is Director of the Catholic Campaign for Human Development at the United States Conference of Catholic Bishops.