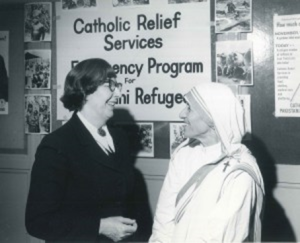 Saint Teresa of Kolkata (1910-1997) and Eileen Egan (1912-2000) represent two Catholic women who played a central role in the Church's international work in the latter half of the twentieth century. Coming from different backgrounds, these two women nevertheless shared much in common, including a deep interest in alleviating the suffering of their fellow humans. While they did not meet until they were both in their mid-forties, they nevertheless managed to form a close personal and working relationship that would span the remainder of their lives.

The future Saint and Eileen Egan spent the first few decades of their lives in a similar fashion. Raised by Catholic families in regions with few other Catholics, the young Teresa and Egan nevertheless found a strong core of faith within their domestic settings. In their teens, both women left their home countries and settled in regions wherein they would remain the rest of their lives. In the 1940's, they each experienced a calling to aid those ravaged by poverty, disease, and conflict. While Egan put her organizational and journalistic skills towards refugee relief, Teresa began the initial steps in founding a new religious order devoted towards tending the sick, poor, and dying.

On an October day in 1960, a small, sari-clad woman arrived in Las Vegas. It was her first visit to the United States and first time away from her adopted home in India in over 30 years. A former geography teacher and now head of her own order, the Missionaries of Charity, this unassuming nun known as Mother Teresa had arrived in a city she described as a perpetual light festival, or “Diwali.” While little known outside Kolkata (Calcutta) at the time, Teresa had been invited to address the National Council of Catholic Women annual conference. Sitting at a little booth during the conference, she addressed an endless series of questions about her sari, free service to the poor, and Albanian origins.

Months ahead of her trip, Teresa had written to her colleague, Eileen Egan: “Thank God I have plenty to do – otherwise I would be terrified of that big public. Being an Indian citizen, I will have to get an Indian passport.” These two sentences encapsulate much of the friendship between Egan and Teresa, revealing personal elements of Teresa’s life and work, as well as the more mundane background work it took to continue her mission.

Egan, a long-time peace activist and employee of Catholic Relief Services, had been a co-worker of this relatively unknown nun for five years at this point. In 1955, they met for the first time in the streets of Kolkata.

After her initial meeting with Teresa, Egan became a major supporter of the Missionaries of Charity and their lay counterpart, the Co-Workers of Mother Teresa. Often acting as both the coordinator and travel companion for Teresa's many international travels, Egan also contributed to the Co-Workers' newsletters and meetings. Simultaneously, known for her work on the behalf of peace, Egan was one of several American witnesses who addressed the Second Vatican Council on issues of war and peace. In 1972, she became one of the co-founders of Pax Christi-USA. She would continue to speak out about the need for pacifism throughout the remainder of her life.

St. Mother Teresa and Eileen Egan founded their friendship in the Tradition of the Catholic Church and their work for the common good. This guided their respective work for decades. May we remember them each for their contributions to Communion of Saints and seek ways for deep and nourishing friendships in our own lives. Cherishing the gift of friendship is one way that we celebrate the feasts of All Saints Day.

This text was originally published at The Archivist’s Nook- a work of the Catholic University of America.

Going Deeper On this All Saints day, learn more about one of the most recently canonized saints, Mother Teresa of Calcutta (Sept. 4, 2016).  Catholic Relief Services offers numerous resources on St. Teresa of Calcutta’s life and legacy, including an intergenerational session, a prayer, and video stories and reflections.