Prayers, Patrons and the Paris Agreement 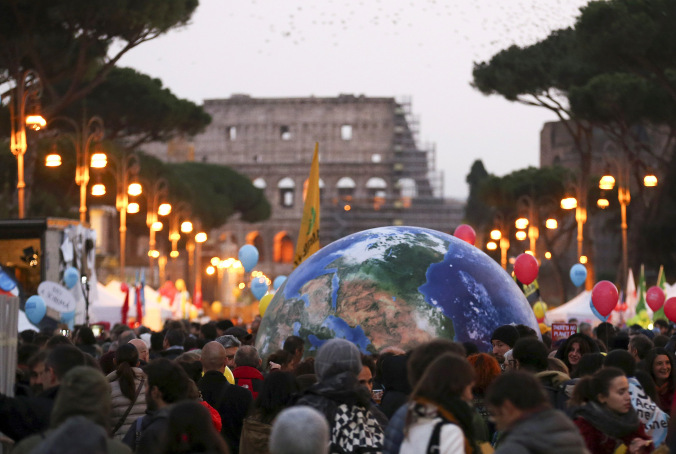 Protesters carry a globe-shaped balloon in front of Rome's Colosseum during a Nov. 29 rally, the day before the start of the U.N. climate change conference in Paris. (CNS photo/Alessandro Bianchi, Reuters)

This year something special happened the day after the Feast of St. Francis, and one could even wonder if it had anything to do with the saint's patronage. “This is a momentous occasion,” said United Nations Secretary General Ban Ki-moon. “What once seemed unthinkable, is now unstoppable.” On October 5, 2016, the so-called Paris Agreement, or COP21, was ratified. The Paris Agreement refers to negotiations between 195 countries to curb greenhouse gas emissions globally. The non-binding agreement establishes that nations must reduce their carbon dioxide emissions in order to keep global temperatures well below a two-degree Celsius increase in relation to pre-industrial levels. Once 55 countries representing over 55% of the worlds emissions signed the agreement, it would be ratified. That ratification threshold was reached on October 5, 2016, when the European Union signed the agreement. The agreement will now be implemented on November 4, one month after the Feast of St. Francis. But the story of the Catholic relationship to the Paris agreement is more than a happy coincidence of dates.

Days before the Paris meeting in December, 2015, Pope Francis said: “The climate is a common good, belonging to all and meant for all…Climate change is a global problem with grave implications: environmental, social, economic, political and for the distribution of goods; it represents one of the principal challenges facing humanity in our day (Laudato Si’, 23 and 25) … In a few days an important meeting on climate change will be held in Paris, where the international community as such will once again confront these issues. It would be sad, and I dare say even catastrophic, were particular interests to prevail over the common good and lead to manipulating information in order to protect their own plans and projects.”

Pope Francis was a champion of the Paris meeting from the beginning and called on political leaders to rise to the challenge to reach a global agreement. The Italian minister of the environment, Gian Luca Galletti, affirmed the Paris agreement might not have happened without Pope Francis. In his own speech at the Paris meeting the minister reminded all members that the pope in “His encyclical letter Laudato Si’ has offered to us the highest moral contribution on the environmental question.” The pope shifted the conversation about climate change from economic, political, scientific, and legal issues into a broader moral and ethical debate, which allowed everyone to participate. This change in tone and substance made room for a global conversation, and also a global agreement, to which no one could be indifferent.

Christians can celebrate this important agreement as not only a sign of promise for reducing pollution and protecting the environment, but also as a sign of unity among nations, collaboration, and mutual understanding. However, this agreement is only one step on a long road. Pope Francis is also a practical man, and commenting on the Paris agreement he warns of the danger of much talk and little action: “I am similarly confident that the Paris Conference on Climatic Change will secure fundamental and effective agreements. Solemn commitments, however, are not enough, although they are certainly a necessary step toward solutions… we must avoid every temptation to fall into a declarationist nominalism which would assuage our consciences. We need to ensure that our institutions are truly effective.”

In order to be “truly effective” in implementing the Paris agreement the task at hand is tremendous. The underlying assumption is that to be able to stay below a two-degree temperature increase what is necessary is that the world reach a net zero emission of carbon somewhere between 2050 and 2100. This simply means a complete overhaul of the global energy system as we know it. Cardinal Turkson, recognized as responsible for drafting Laudato Si’, is well aware of the consequences: “the global community has drawn a red line under a rise in global temperatures of two degrees Celsius. This is will require a complete shift away from fossil fuels toward renewables by about 2070. This is a momentous undertaking.” The pope himself mentioned that the Paris Agreement “represents an important stage in the process of developing a new energy system which depends on a minimal use of fossil fuels, aims at energy efficiency, and makes use of energy sources with little or no carbon content. We are faced with a great political and economic obligation to rethink and correct the dysfunctions and distortions of the current model of development.”

Now it is up to each country, each region and legislature, and ultimately each person, to discern in their own realities how it is they are to contribute to this common cause. Politicians will have their hands full deliberating on how this “momentous task” is to be reached. Furthermore, we must remember that for the pope, the environmental goal of reducing carbon emissions is not a stand-alone cause, but must be integrated into other goals and oriented by higher principles. This “integral ecology” is the organizing logic of Laudato Si’ and articulates the Catholic Church’s support for environmental causes while always ensuring the well-being of people and respect for God himself. The efforts to address climate change must have the dignity of the human person, every person and the whole person, front and center. In Pope Francis’ own words:

“I express my hope that COP21 will achieve a global and “transformational” agreement based on the principles of solidarity, justice, equality and participation; an agreement which targets three complex and interdependent goals: lessening the impact of climate change, fighting poverty and ensuring respect for human dignity… government leaders must do everything possible to ensure that all can have the minimum spiritual and material means needed to live in dignity and to create and support a family, which is the primary cell of any social development. In practical terms, this absolute minimum has three names: lodging, labour, and land; and one spiritual name: spiritual freedom, which includes religious freedom, the right to education and all other civil rights… These pillars of integral human development have a common foundation, which is the right to life and, more generally, what we could call the right to existence of human nature itself.”

Ricardo Simmonds is the Environmental Policy Advisor for the Office of Domestic Social Development, within the Department of Justice, Peace and Human Development of the USCCB.

Going Deeper Learn ways you and your community can help care for Creation with these ten practical suggestions from the Diocese of Stockton.