From Prison to Rome: The Impact of the Year of Mercy on Reentry 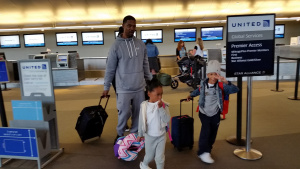 Dominic and his children get their boarding passes for Rome

Rome was an amazing trip – it was more than I ever imagined, and to have my wife and children join me was the icing on the cake! I’ve dreamed of being able to take my family out of the country and experience some amazing places like Rome, but what was even more amazing was the reason why we were invited to Rome. The Jubilee Year of Mercy Mass, dedicated to those who are incarcerated and prison and jail ministers, reinforced and gave even more assurance that the work we do in re-entry with the Society of St. Vincent de Paul is touched and blessed by God!

In his homily, Pope Francis shared, "We know that in God’s eyes no one can consider himself just (Rom 2:1-11). But no one can live without the certainty of finding forgiveness! The repentant thief, crucified at Jesus’ side, accompanied him into paradise (Lk 23:43). So may none of you allow yourselves to be held captive by the past! True enough, even if we wanted to, we can never rewrite the past. But the history that starts today, and looks to the future, has yet to be written, by the grace of God and your personal responsibility. By learning from past mistakes, you can open a new chapter of your lives. Let us never yield to the temptation of thinking that we cannot be forgiven. Whatever our hearts may accuse us of, small or great, ‘God is greater than our hearts’ (1 Jn 3:20). We need but entrust ourselves to his mercy." 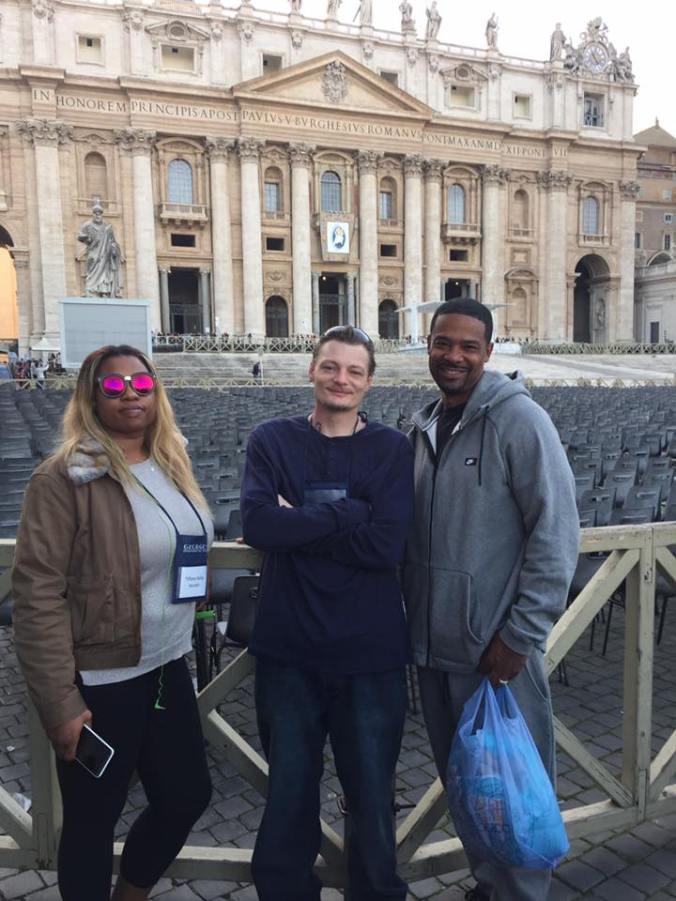 My trip to Rome had me thinking of my faith and ways to not only strengthen my relationship with God, but my wife’s and children’s as well.  We take for granted the martyrs that sacrificed their lives for merely the right to worship. Pope Francis’ homily is affirmation that God is touching the work we do and the path we are taking is the right one.

I’m so blessed to be part of this movement that not only saved my life but turned me into a leader and gave me an opportunity to help others who struggle to get their lives back on track after incarceration. 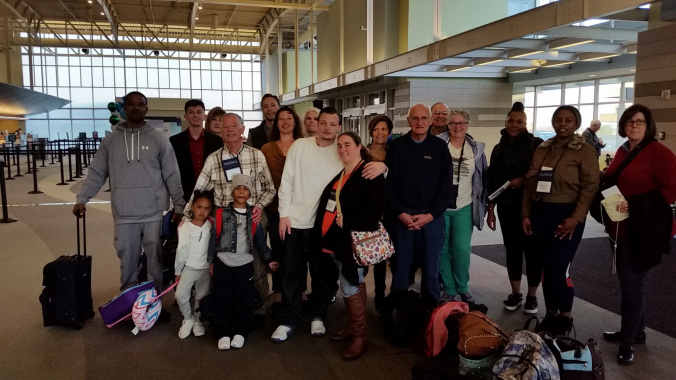 The Cincinnati delegation prepares to depart to Rome

To be able to attend a Mass led by the Pope is a once in lifetime experience. But to attend a Mass by the Pope that focuses on those who are formerly incarcerated and their was mind blowing! I’m grateful for the opportunity to broaden my horizons by the experience I had in Rome. I learned so much and have such a greater appreciation for the sacrifices people made for their faith. I want to thank the Archdiocese of Cincinnati, Brother Mike Murphy, the Catholic Campaign for Human Development, and each and every person that attended the pilgrimage to Rome for the amazing experience that I and my family had.

The work we do is hard and frustrating at times but Pope Francis has inspired me to do more, as much as humanly possible: educate, connect, engage, build meaningful relationships, organize, and advance issues that build safe, loving, and thriving communities! To have Pope Francis’ support and encouragement for the fair treatment of those who are formerly incarcerated is evidence that our suffering is not going unheard or unseen. I have not felt this hopeful in a very long time!!!!

Thank you, Pope Francis, for providing hope to a population of people who have been hopeless for far too long!

Dominic Duren was among those from the Archdiocese of Cincinnati invited to the Vatican for a Jubilee Year of Mercy Mass for people who are incarcerated and those who minister in prisons and jails. He is the Re-entry Coordinator for The Society of St. Vincent de Paul in Cincinnati Ohio.

The Help Program, founded by Br. Mike Murphy and provides the leadership development and community support for the returning citizens.

BLOC Print is a social enterprise that provides training and jobs.