Finding God in the Aftermath of the Presidential Election 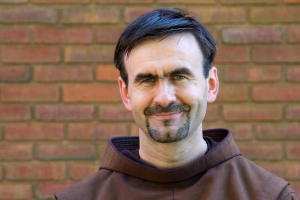 Tuesday night, Nov. 8, I stayed awake past midnight, anxious to find out the results of the Presidential Election. Finally, I rested my weary head on a pillow. “O God where are you in the midst of all this?” I sighed. “And what do you want me to do?”

I got an answer a few days later when, out of the blue, an image and a story popped into my mind. That image was one of Giotto’s frescos in the Upper Church of St. Francis in Assisi, Italy. The fresco tells a story. St. Francis was passing by the city of Arezzo, which was in a grip of an intense conflict. According to the story written by St. Bonaventure, “St. Francis saw a multitude of demons rejoicing over the city and instigating the angry citizens to destroy each other.” The people were deeply divided along economic, social, and political fault lines. Many felt disempowered. That disempowerment, in turn, gave rise to fear, resentment and hatred. It bred mistrust, mutual demonization, and even violence.

In response to that scene, St. Francis sent Br. Sylvester as his herald to preach a message of peace. On the fresco, you see Br. Sylvester standing in front of the city of Arezzo while St. Francis, down on his knees, is in a deep contemplative prayer. As a result of the intervention of the two friars, “the tumult in the city was appeased, and all the citizens, in great tranquility, began to revise the statutes and regulations of the city, so that they might be duly observed. Thus, the fierce pride of the demons, which had enslaved the miserable city, was overcome by the wisdom of the poor. The humility of Francis restored it to peace and safety.” The fresco depicts the demons fleeing Arezzo. In this post-election season in America, there are – and I’m speaking figuratively - demons hovering over our cities and the entire nation. They are the demons of fear, callousness, and incivility. Those demons incite intolerance, discrimination, personal, and systemic violence.

What can we do to follow the lead of the two medieval Franciscan friars who put evil to flight?

I hope that, just like St. Francis and Br. Sylvester, our faith communities will continue to inspire and empower people to live out a Gospel that is not truncated but, rather, is inclusive of civic engagement. So, where is God in this tumultuous post-election period? As typical of our God of surprises, he might be waiting to be found in your commitment to deeper prayer and contemplation, in your pledge to civility in dialogue, and in the tenacity with which you stay engaged in various community or advocacy efforts without giving in to despair or cynicism. I know it gets tough. But God believes in you.

Jacek Orzechowski, OFM was born and grew up in Poland. After immigrating into the U.S. in 1988, he joined Franciscan Friars of Holy Name Province and obtained a Master of Divinity degree from Washington Theological Union. For the past eight years, he has been ministering at the St. Camillus multicultural parish in Silver Spring, M.D. He also serves as a member of the Board of Directors of the Franciscan Action Network and he is involved in the Archdiocese of Washington Care for Creation committee.

Going Deeper! Catholics around the country are involved in efforts to transform their communities on a year-round basis. Learn what ongoing faithful citizenship looks like by visiting the WeAreSaltAndLight.org Success Stories page, where you can learn how faith communities are working on racial justice, predatory lending, immigration, caring for God’s creation, and more.