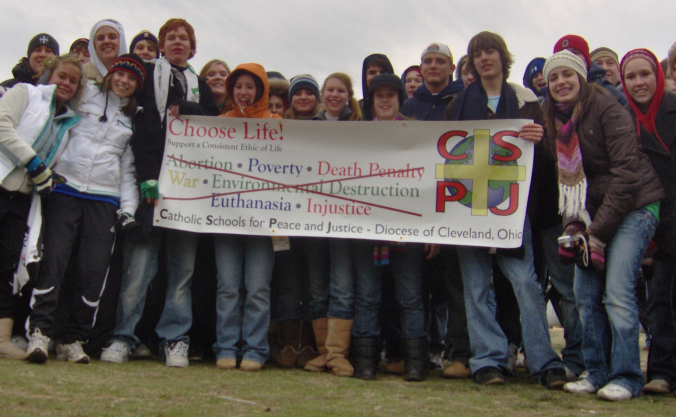 Last week our Church joined ecumenical efforts worldwide in praying for and celebrating our Christian Unity. Perhaps Catholic Schools Week will not only be a time to celebrate the great gift and legacy of Catholic education, but also a time to answer our call to Catholic unity, even if that means working with your high school’s arch-rival! Often times, our Catholic schools may unintentionally compartmentalize our efforts for peace and justice formation. An invitation comes to your high school for your students to participate in a social action. "Oh, stick it his box. He is our peace and justice guy." Does this sound familiar? That was me. I often had many service or faith-based advocacy invitations from religious congregations, local pro-life and human rights groups, or our diocesan social action office with whom I would have loved for my students to become acquainted. It can sometimes feel like one teacher or campus minister is tasked with a colossal project: introducing our students to Catholic social teaching and the discipleship of living out our faith in society. At least that is how it felt to me. Until one day about 15 years ago. It was the run-up to the war in Iraq, and our pope and bishops had been speaking out to slow our nation's rush to military action. I was a busy high school theology teacher, and my conscience was tugging at me to engage my students with the reality unfolding before our eyes. But I felt somewhat overwhelmed and disconnected – the moral stakes of war were just too big a task for one person to address. Little did I know, I was not alone. The Holy Spirit was about to spark a flame of justice in a new generation, bringing to birth Catholic Schools for Peace and Justice (CSPJ) in the Diocese of Cleveland. A former teacher of mine was feeling the same call to act in his school, so he sent an email to several friends and colleagues from various academic disciplines in high schools across our diocese. He invited us all to meet, and it was this motley collection of mostly teachers and campus ministers who came up with an unrivaled proposal. Eventually, we would approach our bishop and ask if we could gather with students at the Cathedral to pray for peace and continue with a public witness at Cleveland’s Public Square. The collaboration was exhilarating. As adult leaders, we found solidarity with one another in our common struggle to support our students in living out our baptismal call to work for justice and peace. The prayer and witness for peace (2003) exceeded our wildest expectations. We had representative participation from nearly all of the high schools in the diocese, totaling around 750 students and teachers. The collaborative spirit of that event began to spread as an inextinguishable fire. Students and teachers found hope and freedom in joining beyond the parochial boundaries that usually separated us. As in many places, folks from our Catholic high schools in Cleveland most commonly met one another at competitive athletic events or in uncomfortable admissions-related encounters. CSPJ was different. We found common ground in our faith and vocation to live the gospel. Bishop Anthony Pilla believed in us and guided us to work with our Diocesan Social Action Office to formalize our relationship with one another in this work through renewing annual covenants between the CSPJ adult team and the schools we represented. We have since received the vital support of not only Bishop Pilla, but also his successor, Bishop Richard Lennon. Consequently, CSPJ has been graced with a tremendous cast of partners at each of our schools: encouraging administrators, energetic and emerging student leaders, and a contagiously inspiring mix of both veteran and rookie educators. CSPJ has engaged thousands in the past 15 years through countless events. Our creativity is not bound by the divisive political climate that separates us into "either-or" boxes. Rather, our collective energy arises explicitly from our Catholic "both-and" moral conviction and imagination. We gather annually during Respect Life Month in October for a Mass and public witness where our students courageously share their personal stories and dreams for building a Culture of Life.  This is not a one-issue event. Rather, all life issues in the Consistent Ethic are valued and represented. Following the lead of the Ohio bishops, CSPJ has also advocated for the end of the death penalty through our presence at vigils at the Southern Ohio Correctional Facility during executions. We have organized public witnesses at the Statehouse, including “Wheels for Justice,” a 3-day, 150-mile bicycle trip from Cleveland to Columbus (2006). Other highlights over the years include:

Some may not think it possible that long-time high school rivals can work together. But when we come together with humble hearts, the Holy Spirit may grant us a glimpse of the unity we seek - realizing we’re all on the same team. 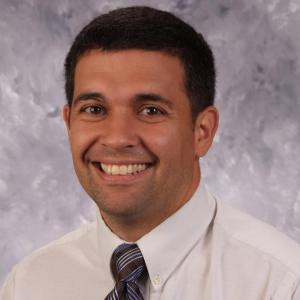 Augie Pacetti is a co-founder of Catholic Schools for Peace and Justice and serves as Director of Campus Ministry at Saint Ignatius High School in Cleveland, Ohio.  Going Deeper Read more about Catholic Schools for Peace and Justice on our WeAreSaltAndLight.org website. There, you can also access resources and educational activities to engage high school students in learning about Catholic social teaching and poverty.