Our Border Family: Hope at the Border 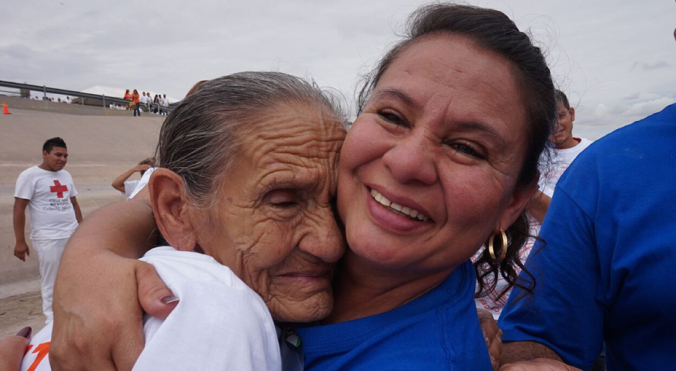 During "Hugs Not Walls," families who live separated by the United States-Mexico border were able to see and embrace each other for a few previous minutes.

The Catholic church is taking a compassionate, non-confrontational approach to the plight of people in three dioceses along the U.S. border with Mexico. It’s also using exquisitely simple, Gospel-based principles to underscore human dignity and address systemic poverty and injustice. Bishop Mark Seitz of El Paso told me his Texas diocese and the contiguous ones in Juarez, Mexico and Las Cruces, New Mexico form the largest bi-national community in the hemisphere, if not the world. “The very nature of our border area is it’s a family. It’s a large community that has had a line drawn through it,” he said. And it has long been this way. People in the area move freely across the border to shop, eat, and be with family. The result is an active community where the unique nature of the towns on either side of the river contributes something to strengthen and improve their neighbors. 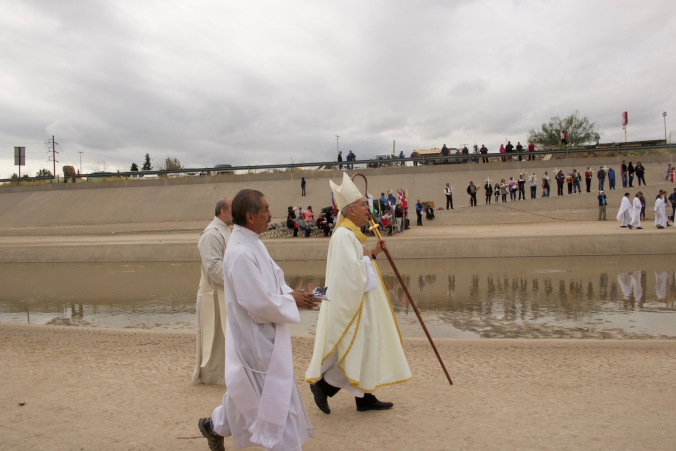 The longstanding reality of intermingled families and thriving communities is a counterpoint to an increasingly strident national narrative about borders. Bishop Seitz points to the head-scratching portrayal of the border as a forbidding place of confrontation “where the ‘us’ people fend off the ‘them’ people, where the people at home fight off the aliens. That has no resonance here,” he said. The Hope Border Institute is a new-since-2015 grassroots effort to apply Catholic social teaching principles to immediate and longer-term issues along the border. It sprang from conversations among local clergy in the three dioceses and people in several groups funded by the Catholic Campaign for Human Development (CCHD). They were looking for a way to address the fall-out from a growing number of policies imposed on the area that frankly made little sense. When I asked him about it, Dylan Corbett, the group’s executive director, said laws and regulations made in Austin, Washington, DC and Mexico City do not necessarily correspond to realities on the ground. Sometimes they cause new problems without solving the challenges they were intended to fix. He pointed out there is already a wall and a new wall likely won’t do what is promised because it doesn’t address the root causes of poverty and injustice on both sides of the border and won’t stop the flow of illegal drugs. The Hope Border Institute brings together CCHD-funded groups, activists, and grassroots organizations, low-wage workers and migrants, members of the media, young persons, academics, church workers, and clergy to share perspectives, explore Catholic social teaching, and look through the eyes of others living in the border communities. It helps people work collectively and intentionally across “borders” of geography, race, and ethnicity. And it trains and empowers leaders across both the faith community and civil society to witness the power of unity in diversity and community. Best of all, it’s working! People who might never have spoken and shared stories now see and begin to understand the experience, perspective, and human dignity of each other. Bishop Seitz said, “The role of the Church and its teaching is such an important counterpoint to the uninformed reaction people have had to these border questions.” How true. Beth Griffin is a free-lance journalist with an abiding interest in social justice. Hope Border Institute is funded by the Strategic National Grant Program of the Catholic Campaign for Human Development. Read more about their work in the most recent edition of the CCHD Newsletter: Helping People Help Themselves.

Going Deeper! The Catholic Campaign for Human Development and the Office of Education & Outreach are partnering to foster encounter in other ways.  Our new small grants program seeks to foster Hispanic ministry-social justice diocesan collaboration, and this recent webinar lifted up examples of where this is already successfully happening around immigration, workers’ rights, trafficking, and other issues affecting the immigrant community.   All photos courtesy of Hope Border Institute.