Consideration of racism is grounded in fundamental scriptural beliefs: equal dignity of all people, created in God’s image; and Christ’s redemption of all. The Catechism of the Catholic Church spells this out:

The equality of men rests essentially on their dignity as persons and the rights that flow from it: “Every form of social or cultural discrimination in fundamental personal rights on the grounds of sex, race, color, social conditions, language, or religion must be curbed and eradicated as incompatible with God’s design."

Moral judgments on racism, based on equality, are consistent: “any theory or form whatsoever of racism and racial discrimination is morally unacceptable” (Compendium); and “racism is not merely one sin among many, it is a radical evil dividing the human family...” (Brothers and Sisters to Us). Jesus tells the Good Samaritan story— one of his three “great parables” —to answer “Who is my neighbor?” His response addresses entrenched divisions between Jew and Samaritan and sets the stage for the unity of “one Lord, one faith, one baptism” (Eph. 4:5; Deus Caritas Est). This unity admits “no inequality on the basis of race or nationality, social condition or sex…” (Lumen Gentium). The Many Faces of Racism Catholic teaching “emphasizes not only the individual conscience, but also the political, legal, and economic structures...” (Economic Justice for All). Racism is about people and about group behaviors and societal organization. Individual racism includes conscious acts, spontaneous attitudes, “the tendency to stereotype and marginalize,” indifference, and “the triumph of private concern over public responsibility…” (Brothers and Sisters to Us). Laws such as U.S. segregation or South Africa’s apartheid represent blatant systemic racism (The Church and Racism). More subtle racism treats groups as “second-class citizens with regard, for instance, to higher education, to housing, to employment and especially to public… services...” (The Church and Racism). Even more subtle racism is now masked in appeals to equality that guarantee that past inequalities are perpetuated by blocking corrective efforts. (Brothers and Sisters to Us). “At times protestations claiming that all persons should be treated equally reflect the desire to maintain a status quo that favors one race and social group at the expense of the poor and non-white” (Brothers and Sisters to Us). Social, economic, educational, and political advantages from the past are cemented as the often-unconscious privilege of the present. Thus, “Racism obscures the evils of the past and denies the burdens” that history imposes on people of color today (Brothers and Sisters to Us). Saint Pope John Paul II maintained a fourfold personal responsibility for social evils:

… the very personal sins of those who cause or support evil or who exploit it; of those who are in a position to avoid, eliminate or at least limit certain social evils but who fail to do so out of laziness, fear or the conspiracy of silence, through secret complicity or indifference; of those who take refuge in the supposed impossibility of changing the world; and also of those who sidestep the effort and sacrifice required, producing specious reasons of a higher order. (Reconciliation and Penance)

Thus we can be involved in societal racism as: 1) supporters or exploiters; 2) accessories through complicity or indifference; 3) accessories through fatalistic acceptance; and 4) accessories through consecration of the status quo. Responses to Racism Personally, we are called to conversion—to respect the rights, dignity, equality, and sanctity of racially different individuals and groups. “This does not mean erasing cultural differences,” but “…a positive appreciation of the complementary diversity of peoples” (The Church and Racism) and the distinct contributions of racial minorities to “the internal strength of our nation” (Brothers and Sisters to Us). Moreover, the tradition emphasizes “respect for foreigners, acceptance of dialogue, sharing, mutual aid, and collaboration with other ethnic groups.” (The Church and Racism) Systemically, we must unmask social evil and, like prophets, denounce injustice. We must eradicate overt and covert racism. This requires solidarity with those suffering from disadvantages woven into society and our self-perceptions. For John Paul II, this solidarity is “not a feeling of vague compassion or shallow distress at the misfortunes of so many people…On the contrary it is a firm and persevering determination to commit oneself to the common good…”(Sollicitudo Rei Socialis). Our interdependence globally implies a moral responsibility for human development; this, Pope Benedict writes, “depends, above all, on a recognition that the human race is a single family working together in true communion, not simply a group of subjects who happen to live side by side”(Caritas in Veritate). For those who benefit from the express and hidden advantages of racial inequities—still continuing—the church urges honesty about the past and present so that everyone’s future will be different. “An honest look at the past makes plain the need for restitution wherever possible— makes evident the justice of restoration and redistribution.” (Brothers and Sisters to Us). 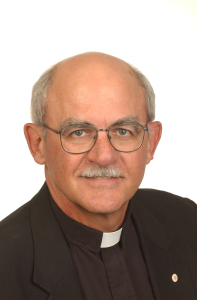 Fr. Fred Kammer, SJ, JD is Director of the Jesuit Social Research Institute at Loyola University New Orleans.  This post was adapted for ToGoForth. Read the original version at the JustSouth Quarterly website.

Going Deeper At USCCB.org/racism, read U.S. bishops’ statements, access resources and tools, and learn how faith communities are working for racial justice. At WeAreSaltandLight.org, find out how your faith community can welcome and celebrate diversity, and form and nurture diverse leadership.