Persecution of Christians and other religious minorities is not a abstract concern for me. It is deeply personal. Two years ago in Erbil, Iraq, I looked out the window of my hotel to see tents packed together on the grounds of a chapel.  Christian families, displaced from Mosul, now lived in tents.  I remember strolling through the narrow, mud-caked paths among the tents.  Families, many with young children, shyly peered out from their tents. In one tent there were 2 families and 11 persons. In a “deluxe” camp for displaced Christians, families lived in “caravans” (small trailer homes).  I remember seeing blankets and mattresses neatly stacked in a corner, a silent testimony to the family members who shared one room.  A mother broke down in tears as she described their night flight from Mosul from the Islamic State (ISIS).  They fled with only the clothes on their backs. 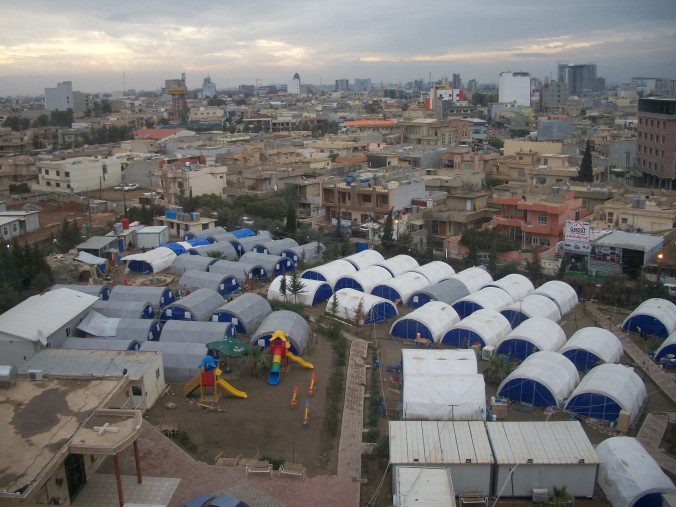 In Dohuk, north of Erbil, I met a 34-year-old Yezidi policeman.  His family of 8 fled on foot to Mount Sinjar where they spent 12 days with little food in scorching summer conditions, hiding from ISIS.  Kurdish fighters rescued them.  They now lived in one room in a nearby village; 5 other families were in the same house.  He hoped to return to his ancestral village when security allows. He was in Dohuk for a Catholic Relief Services distribution of kerosene heaters, kitchen kettles, carpets, and blankets to get them through the cold winter. A year ago in Jordan, I met an Iraqi Christian family, mother, father, and three young adult daughters.  They too had fled ISIS in the middle of the night.  On the road to safety they saw young women being kidnapped and thanked God that they were able to flee safely with their daughters to Erbil and later Jordan. A young male student from the University of Mosul wanted to continue his studies, but he needs to leave Jordan because he cannot work.  I wonder if any country accepted him as a refugee.  I worry that our nation is closing its doors to many such fine young men. It is important that we pray and work for persecuted Christians and other religious minorities. Cardinal Daniel DiNardo, President of the U.S. Conference of Catholic Bishops, and Bishop Oscar Cantú, Chairman of the Committee on International Justice and Peace, have designated Sunday, November 26, as A Day of Prayer for Persecuted Christians that initiates “Solidarity in Suffering,” a Week of Awareness and Education. USCCB is collaborating with the Knights of Columbus, Catholic Relief Services, CNEWA and Aid to the Church in Need on this project.  There are resources available to assist parishes, schools and campus ministries in observing this Day of Prayer and Week of Awareness at  www.usccb.org/middle-east-Christians.  There you will find homily notes, intercessions, recommended aid agencies, prayer cards (in English and Spanish), logos for local use (in English and Spanish) and much more.  For social media, we are using the hashtag: #SolidarityInSuffering.  I hope you will join us in this effort. As the United States Conference of Catholic Bishops has said, “To focus attention on the plight of Christians and other minorities is not to ignore the suffering of others. Rather, by focusing on the most vulnerable members of society, we strengthen the entire fabric of society to protect the rights of all.”  Persons of all faiths suffer persecution.  In the Middle East, Christians, Yezidis and Shia Muslims suffer from ISIS.  We must express solidarity in suffering with our brothers and sisters.