“[The country] has yet to solve the question of race; that has been America's tragic flaw. We have never really come to grips with race. We went through the civil-rights movement, but here we are in 1993 with young people who never knew racial segregation, never knew the civil-rights movement, and all of a sudden on college campuses you have a tremendous amount of racism. There's still an awful separation between people. It isn't only against blacks. It involves Asians, Hispanics, and Native Americans. Not that other countries don't have the same problem. The Church for a long time did not take a stand. It has started to.” 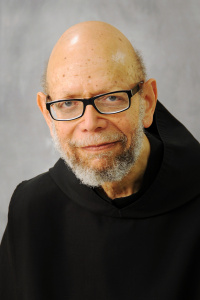 Fr. Cyprian Davis, OSB was my professor, mentor, and spiritual director. He was a Benedictine monk of St. Meinrad Archabbey whose passion was his monastic vows and his faith in Jesus Christ. He was also a Black Catholic, staunchly proud of his African American heritage. Fr. Cyprian was ordained a priest when Black American priests were few in number. I fondly remember sitting in his classes and hanging on his every word. He was a storyteller. His voice had gravel in it, his stance was slightly bent over, and his eyes lit up as he recalled stories of the past. He also had a wonderful humor that brought those stories to life in a way that few can. I always imagined that around a campfire he would be king for no one could match his ability to speak of things that happened hundreds and even thousands of years ago as if they were modern day events. He literally put you as a bystander into those stories. His detailed history of Black Catholicism is the seminal work on how truly diverse our faith is, and how our Catholic faith has never been nor will it ever be a “European” religion. Holding a doctorate in history, he wanted to study the Church Fathers but upon returning to the United States and the country in the midst of the Civil Rights Movement he realized that his contribution to the movement was to highlight the gift that black folks had offered to the Church and the nation. But he was not simply a bookworm. He was a man of action. He marched in Selma across the Edmund Pettis bridge and was one of many who faced down state and local law enforcement in the fight for equal rights. He personally placed himself in the midst of violence against an unjust system to demand he and all people of this country be treated as equals, to have his and others’ dignity recognized. In addition to being a student, I had the blessing to have him as a spiritual director. There is an intimacy that comes with a spiritual director, a fraternal bond that allows not only the spiritual director to see into the heart of the directee but for the the directee to see deeper than the casual interaction between professor and student. It required me to humbly open myself up to his wisdom and guidance and to listen. I will always remember his voice the day he called me “friend”; I felt unworthy of the honor. I trusted him and saw a prophet before me on religious, political, and social issues of today, particularly those connected to racism in America. Over the last couple years after I graduated from Saint Meinrad his health began to decline and so it was difficult to keep contact with him before he entered eternity in 2015. I have wondered over the past couple years since the protests in Ferguson, NYC, Chicago, Minneapolis, and elsewhere what he would have had to say about the Black Lives Matter movement and the challenge our nation faces with the racial division that never went away but was only masked over the course of the 5 decades since the Civil Rights Act. I know he would be disheartened by the injustices in our system but not surprised by what is transpiring in our nation. He would also offer hopefulness. This man who faced down the segregationists alongside Dr. King in Selma confronted the violence and knew that things can be better. As he taught about historical and contemporary prejudice and racism in society I never heard bitterness, only a passion to effect change. He challenged us all to examine how we may be contributing to injustice and how we may find our path to helping overcome it. He offered that challenge to dig deeper into resources and histories of America and of the Church. It was Fr. Cyprian’s way of giving voice to the stories often left untold in a culture dominated by a “whites only” voices. As Catholics the Sacrament of Reconciliation is where we not only confess our sins, but discern how we may grow from our personal shortcomings and place ourselves at the mercy and love of God to help us learn from our sins. In the examination of conscience that we do to prepare for confession we open ourselves up to discern ways in which we may not be living up to the call of the Gospel and that examination helps us to discover things to work on for our own betterment of which we may not even be aware. In the spirit of Fr. Cyprian and his compassionate but challenging expectation for Catholics to address the sin of racism, in my next post we will have a “racial examination of conscience” to help us all become more aware of how we may grow in understanding and compassion for one another. In the meantime, please consider reading the US Bishops’ document “Brothers and Sisters to US” which can be found online at: http://www.usccb.org/issues-and-action/cultural-diversity/african-american/brothers-and-sisters-to-us.cfm

Mark Schmidt is Director of the Office of Respect Life and Social Justice in the Archdiocese of Dubuque. This post was adapted for ToGoForth. Read the original version at The Witness.

Going Deeper! Faith communities around the country are praying and acting for racial justice. For ideas, watch this Google hangout on racial justice that highlighted several examples.