On Pope Francis’ Birthday, Celebrating His Words and Wisdom 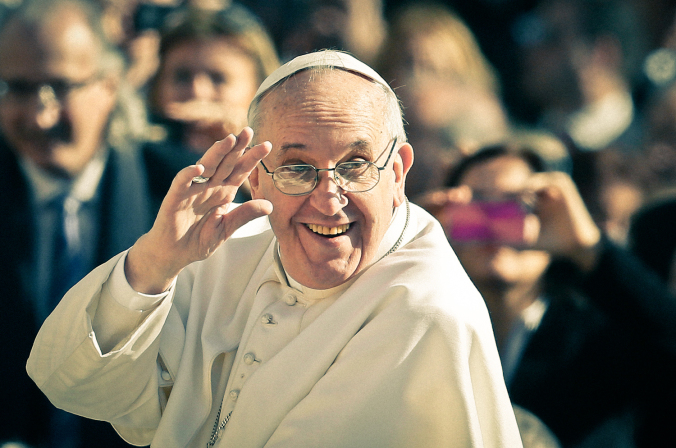 Today, December 17, is Pope Francis’ birthday! The USCCB Department of Justice, Peace and Human Development maintains a Pope Francis Quotes collection, which is updated several times each year.  It highlights the Holy Father’s words on poverty, care for creation, migration, and many other issues, in order to inspire us to live and act as missionary disciples. To honor Pope Francis on his birthday, we’ve selected a few favorites: three from Evangelii Gaudium, Laudato Si’, and Amoris Laetitia, and three from recent months:

“Each individual Christian and every community is called to be an instrument of God for the liberation and promotion of the poor, and for enabling them to be fully a part of society” (Evangelii Gaudium, no. 187).

“A true ecological approach always becomes a social approach: it must integrate questions of justice in debates on the environment, so as to hear both the cry of the earth and the cry of the poor” (Laudato Si’, no. 49).

“Christian families should never forget that ‘faith does not remove us from the world, but draws us more deeply into it... Each of us, in fact, has a special role in preparing for the coming of God’s kingdom in our world.’ Families should not see themselves as a refuge from society, but instead go forth from their homes in a spirit of solidarity with others. In this way, they become a hub for integrating persons into society and a point of contact between the public and private spheres” (Amoris Laetitia, no. 181).

“Hope is the force that drives the hearts of those who depart, leaving home, their homeland, at times their relatives and families — I am thinking of the migrants — in search of a better life which is worthier of them and their loved ones. And it is also the impulse in the heart of those who welcome: the desire to encounter, to get to know each other, to dialogue. . . . Hope is the force that drives us ‘to share the journey,’ because the journey is made jointly . . . . Christ himself asks us to welcome our brother and sister migrants and refugees with open arms, with arms wide open” (General Audience, Sept. 27, 2017).

“Poverty is not an inevitable misfortune: it has causes that must be recognized and removed, in order to honor the dignity of many brothers and sisters, after the example of the Saints” (Angelus, Oct. 15, 2017).

“The teaching of John XXIII remains ever valid.  In pointing to the goal of an integral disarmament, he stated: 'Unless this process of disarmament be thoroughgoing and complete, and reach men’s very souls, it is impossible to stop the arms race, or to reduce armaments, or – and this is the main thing – ultimately to abolish them entirely' (Pacem in Terris)” (Address, Nov. 10, 2017).

Let’s honor Pope Francis today by taking these words to heart, responding with prayer and action, and sharing them with others! Going Deeper To pray, reach out, learn and act together on these and other topics, visit WeAreSaltandLight.org.