The “New Selma” Is Being Watched

As a young boy growing up in a white working-class neighborhood in Akron, Ohio, I rarely encountered blacks or, for that matter, anyone different than me with the exception of “hippies,” who I was told not to trust. But when riding around town with my grandfather in his Ford pick-up truck, I’d see him display great generosity towards blacks, be the first to come to their aid and (I later learned) count them among his close friends at the Goodyear factory where he worked his entire life.

This quiet observation of my grandfather’s actions left an impression on me as a young boy.

The mid- to late-1960s were, of course, racially charged times, but I was too young to follow everything that was being said and done. However, I wasn’t too young to be influenced by watching what my grandfather actually did. His seemingly random acts of kindness towards blacks, my earliest lesson on race, have stayed with me to this day in St. Louis—my home now, and a city some have recently called the “New Selma,” due to the 2014 shooting of Michael Brown and last September’s acquittal of Officer Jason Stockley.

Following these events, many powerful words spoken. St. Louis Catholics were inspired and challenged by the words of our local and national leaders: confront our original sin of racism, be uncomfortable as we break down racial barriers, and follow Christ’s example as we build the Kingdom here on earth. But words must be followed by concrete actions, and calling St. Louis the New Selma means we especially are being watched.

From heaven, we are being watched by our beloved St. Louis North Star, Sister Antona Ebo, who passed away in November. Sister Ebo, a pioneering black Franciscan Sister of Mary, actually risked her life to march on the front lines with Dr. King in Selma in 1965.

St. Louis Archbishop Robert J. Carlson was being watched when he publicly commissioned me and 26 other Catholics in a High Mass at our magnificent Cathedral to serve on the Archdiocesan Peace and Justice Commission—our response to Ferguson and deep, legally seeded racial inequities in St. Louis. Now the Commission is being watched as well.

As others watch, we are (1) fostering racial equity through dialogue and Archdiocesan-wide engagement (“nothing about us without us”); (2) advancing early education initiatives for all kids; and (3) promoting at-birth Child Development Account so that every child in the region has a better shot at college and economic success. We deliberately chose aspirational, hope-oriented strategies so that we could bring our black and white, rich and poor, and pro-life and social-justice communities together. 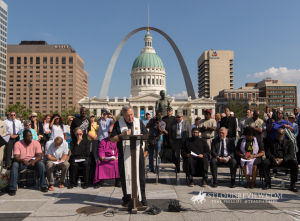 Local and national news outlets watched as Archbishop Carlson organized an interfaith prayer service within sight of where Dred Scott first pled for his ultimately unsuccessful bid for freedom. He followed that up by bringing sparring parties together, such as protesters and the police. And the Archbishop’s signature Today and Tomorrow Educational Foundation to expand Catholic educational opportunities in low-income, minority communities will surely advance justice as well.

But the challenge remains immense: For the Sake of All, a regional collaboration aimed at closing racial health and economic gaps, reports that low levels of education and poverty among African Americans has cost St. Louis an estimated $4 billion in just one year, and that residents of neighboring yet racially isolated zip-codes have an up to 18-year difference in life expectancy.

When watched before, however, St. Louis Catholics have been inspiring. In addition to Sr. Ebo, St. Louis University admitted students of color when no other historically white college in a former slave state had done so. And Cardinal Ritter integrated all Catholic schools in the Archdiocese in 1947—eight years before Brown. v. Education required public schools to do so—and threatened excommunication of any Catholic who opposed him. We know the New Selma is being watched by Catholics and others nationwide; we welcome your attention, prayers and support. But, more importantly, we call upon Catholics everywhere to confront racism and create opportunities to bring their divided peoples and communities together in Christ. We are watching you, too, like me watching my grandfather as a boy, hoping that we can learn, struggle and achieve peace together. ---

Ray Boshara is a member of the Peace and Justice Commission at the Archdiocese of St. Louis, and a consultant to the USCCB Office of Justice, Peace, and Human Development.

Going deeper:
Visit We Are Salt and Light and learn how a regular neighborhood walk by a bishop and parishioners has helped bridge conversation and action at: Bishop leads prayer walks, helps parishes address causes of violence.