In 2011, a drone strike killed a 16-year-old American teen, Abdulrahman Al-Awlaki, in Yemen. He died two weeks after his father, a militant cleric, was also killed by a drone in Yemen. They were the first two Americans to be killed by U.S. manned drones. While some administration officials said the death of the son was “a mistake,” it is clear more mistakes are being made. Weddings and funeral parties have been hit. In January 2014, two Western hostages held by al Qaeda in Pakistan were killed by a drone strike.

Despite policies that drone strikes would only be carried out if there is “near certainty of no collateral damage,” drones are used in “signature strikes” in which targets are not identified by name. Rather, all military-age males in a strike zone are considered combatants. In 2013, Senator Lindsay Graham (R-SC) estimated that 4,700 civilians were killed by drones.

Drones are proliferating. Over 80 countries now have them and some non-state actors as well. While drones can be used for peaceful purposes (i.e. traffic/weather monitoring), they have been used increasingly in armed conflicts, including targeted killings. They cost less than putting troops on the ground and can be used in places where the U.S. cannot or would not want to put troops anyway.

It is because lethal drones are so easy and cheap to use that it’s tempting for policymakers to expand warfare into non-war zones. We’ve seen this in Pakistan, Somalia, Yemen, and Libya where U.S. forces are not actually engaged in declared military operations.

Using drones in targeted killings raises many moral and ethical questions in light of just war criteria and international law. Who are the targets? How are they selected? What about due process and rule of law? Is the use of drones creating such hostility that they serve as recruitment tools for extremists? Would we stand for drones being used against us?

The Holy See has urged discussion of the ethical implications of the use of armed drones in international forums. Archbishop Silvano Tomasi noted in 2014 at a meeting on the United Nations’ Convention on Certain Conventional Weapons (CCW):

“The ethical implications are not insignificant. The choice of indifference in relation to this question is counter-productive. … There is still time for the CCW (Certain Conventional Weapons) to become interested in drones before they become an additional source of greater destabilization when the international community needs more than ever stability, cooperation and peace.”

We are all invited to heed this call by learning more and then bringing our informed, Catholic perspective to this essential conversation on the moral and ethical questions around the use of drones in targeted killings. 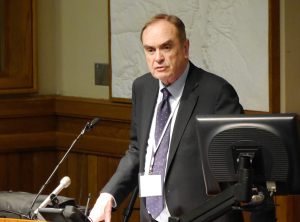 Rev. Richard Killmer is Director for Education at the Interfaith Network on Drone Warfare.

Going Deeper: The Interfaith Network on Drone Warfare (INDW) has produced films and study guides on the history, use, and morality of drone warfare, and with collaboration from the USCCB Office of International Justice and Peace, resources on the Catholic perspective. Information is also available about upcoming regional conferences that include Catholic speakers, as well as possible remuneration from INDW for groups that show a film on this important topic. Get more info here.