Israel, Palestine, and Chasing Hope in a Valley 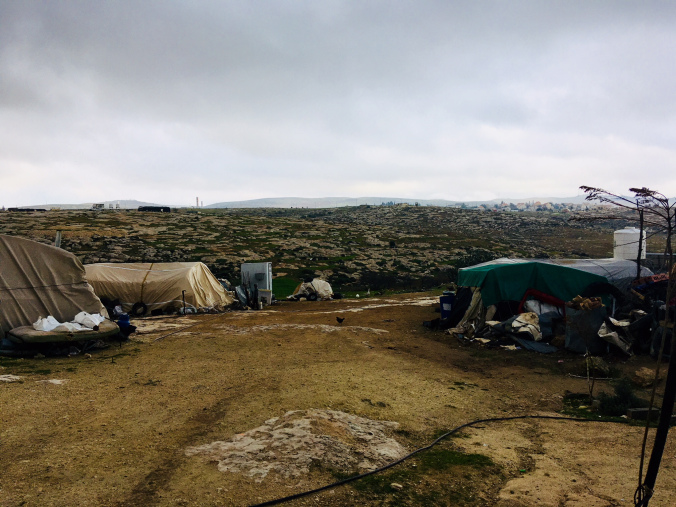 As our pickup crested the rock-strewn path and shuddered to a stop, I took in my surroundings. Up ahead, a cluster of tarp-covered encampments stood guard against the spitting rain, ungainly sights in an otherwise stunning landscape. Further away, a neat row of houses, jarring in their contrast, overlooked a broad sweep of valley. For a moment, our backseat sat in silence. Then, grinning through the rearview, our driver announced the words we now saw graffitied to a boulder: “Welcome to Susya.”

My journey to this rugged village had been an unlikely one. In August of last year, I began an internship with the USCCB’s Office of International Justice and Peace with the hope of test-driving a career at the crossroads of justice, research and advocacy. Five months later, I found myself accompanying ten American bishops to the Holy Land, where the bishops aimed to promote “peace with justice for the two peoples and three faiths of this Land [that] can only come through building ‘bridges, not walls.’"

Susya is not your typical Holy Land tourist destination. Nestled in the rolling hills of the southern Palestinian West Bank, this community of just a few dozen Muslim families has come to epitomize the politically-charged character of Israeli occupation in the West Bank; in the process, it has succeeded in attracting a number of international aid groups to its cause of self-preservation. Climbing out of our truck, I was led into one of these family’s tents, where over a traditional Bedouin meal, our group heard stories of the forcible and repeated displacement our hosts had experienced over the past 30 years.

After erecting a nearby settlement in 1983, the Israeli government designated Susya an archaeological site and expelled its long-time inhabitants. Since then, hoping to preserve their land, heritage and dignity, Susyans have built several tent-cities in the surrounding hills. Yet each time they attempt to rebuild, the Israeli government demolishes the structures, citing missing permits, insufficient infrastructure, and a litany of other violations in its reports.

Through Susyan eyes, these hurdles are a brazen attempt by the Israeli government to drive a native people out of their ancestral lands, thus paving the way for an eventual takeover of the West Bank. Such views are not as far-fetched as they may seem. Since 1967, the State of Israel has built 163 civilian communities (including the neat row of homes above Susya) on Palestinian lands, many of which are currently protected by Israeli soldiers, restrictive highway checkpoints and, when deemed necessary, demolitions of Palestinian homes.

The U.S. Catholic Bishops have long held that the ongoing policy of settlement construction, as well as its attendant injustices, erode the viability of a peace agreement in the Israeli-Palestinian conflict. What is needed instead is a two-state solution: a secure and recognized Israel living in peace alongside a viable and independent Palestinian state. But as long as communities like Susya continue to have their basic freedoms trampled upon, this two-state possibility remains dim.

And yet hope springs eternal. Through prayer, pilgrimage, public advocacy and development projects, the USCCB persists in opposing unjust policies and violence on both sides, knowing that without justice, peace is ultimately unattainable. Our voices join the chorus of all those working toward a sustainable peace in the Holy Land, including Churches for Middle East Peace (which offers resources to help educate, advocate, and elevate regional voices), Catholic Relief Services (learn more about their work here), and local peacebuilding organizations.

I invite you to explore the resources above and join us in our work – for a just, peaceful and dialogue-driven solution to this age-old conflict. For an end to this world’s perennial cycle of vengeance and violence. And for others’ eyes to be opened just as mine were on that drizzly afternoon in a remote corner of Christ’s homeland.

Sam Pence served as intern for the Office of International Justice and Peace in the USCCB Department of Justice, Peace and Human Development.