“Today I wish to emphasize that the problem of intolerance must be confronted in all its forms: wherever any minority is persecuted and marginalized because of its religious convictions or ethnic identity, the wellbeing of society as a whole is endangered and each one of us must feel affected,” - Pope Francis’ Address to the Delegation from the Simon Wiesenthal Center. 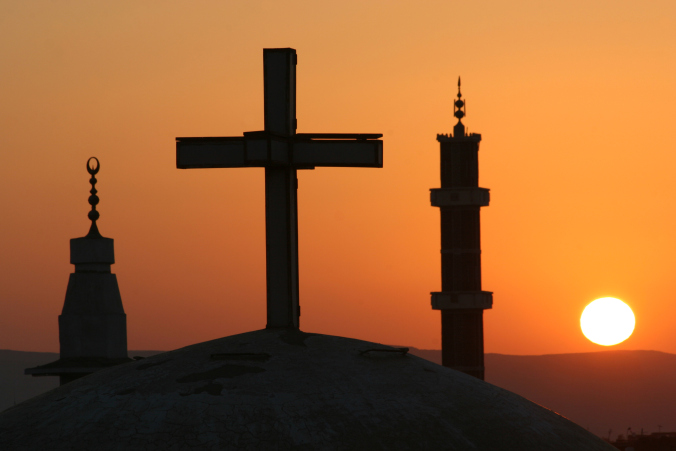 With the onset of World War I, anti-German sentiment in the United States spread like wildfire, spurred on by the president, governors, and citizens alike. Thousands of Germans were interred in camps with no due process. Per the Smithsonian, nearly half a million immigrants of Germanic descent were required to register, carry registration papers on them at all times, and could be detained and interrogated on a whim. Over half a billion dollars’ worth of finances and property were confiscated, most often on scant to no evidence of wrongdoing. In the State of Iowa, German and other foreign languages were prohibited from use over the telephone and in public places, even in church services. Churches were spied on and Christian ministers attacked who did not comply. As many as 18,000 Midwesterners were arrested under the “English only” laws during WWI. German was even banished from being taught in schools and resulted in book burnings of German texts.

The Catholic faith of so many immigrants did not help make their presence any more hospitable. Americans saw Catholics as foreign invaders owing allegiance to a foreign prince, the pope, adhering to a foreign rule of law with canon law, Roman customs, and the like.  How could Catholics possibly be trusted? They were considered incompatible with American values, according to the greater society.

This was the reality into which my own grandpa Eddie Schmidt was born in 1917. A world at war and a war at home against his people. My loved ones were guilty by association and considered enemies by the larger society.

I am reminded of these stories of my own family and German ancestors when I hear of reports about proposed laws that would outlaw the religious attire of Muslims, require Muslims to register with the government, government spying in mosques, and the many stories of fear, hate and violence directed at our Muslim brothers and sisters. There have been reports of women and girls having their headscarves torn off, women in the hijab being set on fire, and sadly, a Muslim college student was beaten to death in Wisconsin. A good friend of mine has shared with me over the years the many times he has himself experienced Islamophobic hate-speech, harassment and violence, even by public officials. Much of this stems from a lack of understanding and a great deal of misinformation about Islam and Muslims.

When such misunderstanding and lack of trust are so prevalent in our society there is no peace in our own nation, let alone our world. It is important for us as Catholics to recognize our relationship to our Muslim brothers and sisters, our neighbors. It is true that we have a very different understanding of God but the Second Vatican Council reminds us:

“The Church has also a high regard for the Muslims. They worship God, who is one, living and subsistent, merciful and almighty, the Creator of heaven and earth (Cf. St. Gregory VII, Letter III, 21 to Anazir [Al-Nasir], King of Mauretania PL, 148.451A.), who has spoken to men.”

Pope Francis, at Holy Thursday in 2016, washed the feet of people of various faiths, including a Muslim and reiterated the church’s teaching that we are all “children of the same God.”

Not only children of the same God, but Muslims have been a part of our nation’s history since its inception, even serving in the United States military in every war that America has been engaged in, including the Revolution and the current wars on terror. Though there are people committing heinous acts of terror in the name of Islam, Muslims themselves are not to be feared simply because they are Muslim.

Pope Francis in August 2016 said the following: “I don’t like to speak of Islamic violence, because every day, when I browse the newspapers, I see violence, here in Italy… and these are baptized Catholics! … If I speak of Islamic violence, I must speak of Catholic violence … I believe that in pretty much every religion there is always a small group of fundamentalists … I do not believe it is right to identify Islam with violence. This is not right or true.”

Each human person made in the image of God is capable of great love and devastating evil, for we are fallen creatures. Even now there are Christian terrorists slaughtering innocents in the Central African Republic. We also recently heard the Rwandan Catholic bishops apologize for the church’s participation in the Rwandan genocide that happened a few decades ago. This allows us perspective when it comes to violence by Muslims.

Where is the violence coming from, then, if not from Islam itself? Islam is not a hierarchical faith like the Catholic Church with one single authority at the top. Islam is more closely related to rabbinical Judaism or evangelical Christianity than the structure of the Catholic Church. There is no universally accepted Muslim Magisterium. Much of the ideology of those who commit terrorism in the name of Islam is traced to an 18th century figure who sought to present a version of Islam that would serve the purpose of raising up a new dynasty on the Arabian peninsula. Over time, with the backlash against colonialism and shifting political realities, this new interpretation of Islam was manipulated for political ends by a small group and gaining adherents and becoming more militaristic. Even so, these strains of terrorism are in the minority within the Muslim world and are condemned throughout the world by Muslims, Sunni and Shia alike, not least of all because the overwhelming majority of victims from these groups are Muslims themselves.

Though not well reported here in the United States, Muslims are leading the call against terrorism. Muslims across the world have repeatedly denounced violence in the name of Islam. After Sept. 11, the people of Iran held a candlelit vigil in Tehran in solidarity with Americans and those lost to terrorism. Government leaders, religious leaders, and the Muslim faithful have condemned terrorism in the name of Islam time and again.

Let us help to build peace in our communities with our Muslim brothers and sisters by going out of our own comfort zones and meeting them in theirs. Many mosques and Islamic centers offer tours and invite guests to come and learn about their faith from the perspective of those who practice it, not filtered through uncharitable propaganda. Perhaps, attend programs like those that have been organized in the Dubuque area called “Children of Abraham” which has the goal to bring Christians, Jews, and Muslims to mutual respect and understanding. Reach out in charity to coworkers or others around you who practice Islam and get to know them on a personal level, then engage in discussion about faith with an open ear and heart. Stand up against speech and actions that attack people of different faith traditions when you encounter them, offer companionship to someone who may be attacked. In doing some of these things we can dedicate ourselves to ensure that our brothers and sisters who practice faith traditions besides our own, particularly our Muslim and Jewish brothers and sisters who share our lineage in Abraham, know that they are welcome in our communities, know that they are loved by us, know that they are our brothers and sisters.

Mark Schmidt is Director of the Office of Respect Life and Social Justice in the Archdiocese of Dubuque.

This post was adapted for ToGoForth and posted during the holy month of Ramadan celebrated by our Muslim brothers and sisters around the world. Read the original version at The Witness.

Going Deeper! Visit WeAreSaltAndLight.org for resources on reaching out and collaborating with other faith traditions. Learn how Catholic faith communities are encountering our Muslim brothers and sisters through prayer and action, dialogue, and pen-pals relationships.