A few years ago, the Archdiocese of Washington invited us to “Walk with Francis” in honor of the pope’s visit to Washington, D.C. This year, Sacred Heart School has been walking with the newly canonized St. Oscar Romero, the archbishop of San Salvador, El Salvador and champion for peace and the poor who was martyred while celebrating Mass in 1980. 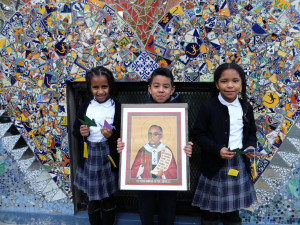 Our journey has taken us to the heart of the classroom and the Vatican, to Cardinal Gregorio Rosa Chávez, auxiliary bishop of San Salvador and to St. Romero’s nieces, and as far away as Norway. On March 20, 2019, in anticipation of St. Romero’s feast day (March 24), we celebrated a Mass with students from around the Archdiocese of Washington.

As we “Walk with St. Romero” this year, we reflect on his homilies, rejoice in his canonization, and try to live his legacy of justice and solidarity. In the weeks preceding his Oct. 14, 2018 canonization, students led morning prayer by introducing different quotes from Romero. Teachers also created lessons from the quotes. Middle school students, for example, reflected on Romero’s prophecy, “Each one of you has to be God’s microphone.” They put up a message board for people to comment on the meaning of this challenge. Second graders constructed a replica of Divine Providence Hospital and chapel, where Romero preached his last homily before being martyred during Mass on March 24, 1980.

The school also hosted a catechetical evening with parents. Students, dressed as Romero’s many siblings, assisted in the presentation. St. Romero’s actual brothers, Tiberio and Gaspar, attended the canonization in Rome. (Gaspar died last month at the age of 89).

In class and at the catechetical evening, students folded origami peace cranes that we sent to the canonization Mass at the Vatican. The colorful cranes had a bright yellow tag that read, “Sacred Heart School loves Romero. Send us a message about your connection to Romero or experience at the canonization....”

Five Sacred Heart School teachers, along with a group of parents and parishioners, served as the school’s ambassadors at the Vatican. We gave the origami cranes to pilgrims from around the world who came to experience Romero, Pope Paul VI, and five other witnesses become officially recognized saints. We also shared the cranes with Cardinal Rosa Chávez and two of Romero’s nieces from the saint’s hometown of Ciudad Barrios. The crane’s message included a QR code that allows us to see the country of origin of those who scan the code. Our cranes reached as far as the Salvadoran diaspora in Norway.

Another project that bridged home, Rome, and beyond was collecting the school community’s prayers. Our school’s director of religious education carried them in her backpack to the canonization Mass, a papal audience the following day, and to churches throughout Italy. A highlight for several members of the trip was praying for all of the students at the tomb of the Franciscan saint, Anthony of Padua. We lovingly left the prayers at his tomb then celebrated Mass.

Our celebrating continued with students from around the archdiocese on March 20 with a Mass in anticipation of St. Romero’s feast day (March 24). Our choir sang songs in honor of Romero. Our offertory collection supported local people in need with gifts of money and food. We reflected on the same readings that St. Romero celebrated with during his last Mass: “Unless a grain of wheat falls to the ground and dies, it remains just a grain of wheat; but if it dies, it produces much fruit” (John 12:24).

St. Oscar Romero is legendary for many members of our community, especially those with Salvadoran roots and those who seek solidarity with them. His canonization provides a special opportunity to explore his prophetic path and challenges us to walk this same holiness. We hope in this Paschal season of dying and rising that you too will walk with St. Romero. As the saint preached in his last homily, “We know that every effort to improve society...is an effort that God blesses, that God wants, that God requires of us.” 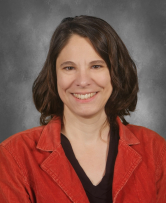 Cinnamon Sarver serves as the director of religious education at Sacred Heart School.  She has theology degrees from Boston College and the University of Notre Dame. Having traveled to El Salvador four times to research St. Romero’s life, she enjoys speaking and writing about his legacy.