Praying with, for, and among Refugees 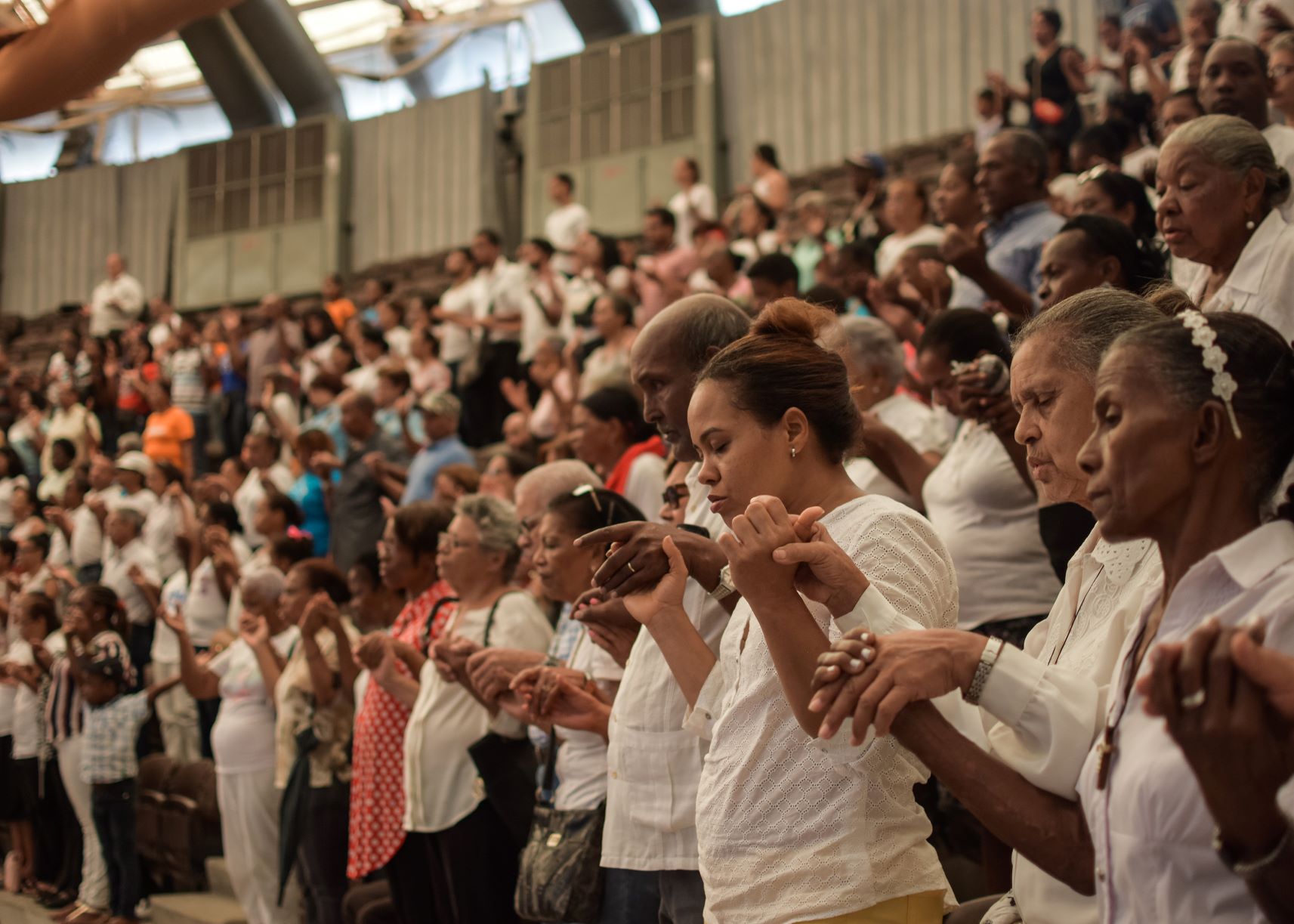 Along with Father’s Day, this past June 20th marked World Refugee Day. It was not at the center of mainstream media, but countless events took place globally to draw attention to one of the central crises of our time--the forced displacement of millions of our brothers and sisters from their homes. The day was designated by the United Nations and recognized by the Biden Administration, which recently reaffirmed its intention to increase the number of refugees resettled in the United States.

The promise of a return to a vibrant resettlement program has been taken up with enthusiasm. Alongside this revival stands a hope for bipartisan support and a recognition of the need for more opportunities for basic education about who refugees are and how they contribute to the welfare of our country.

World Refugee Day is just such an opportunity. This year the day was marked by a series of innovative interfaith events that focused on praying with and for refugees. World Refugee Day Interfaith Prayer Services were organized by the US Conference of Catholic Bishops’ Migration & Refugee Services, in collaboration with the Roundtable Association of Catholic Diocesan Social Action Directors and Princeton University’s Office of Religious Life.

These were not simply meetings or high-level events of national agencies; rather, each service was developed by local partners in the form of networks, coalitions, and resettlement sites, often on their own initiative. World Refugee Day Interfaith Prayer Services consisted of ten locally based prayer services in locations as diverse as New York City, New Orleans, West Palm Beach, Chicago, and Cincinnati. Each featured diverse religious leaders and local refugees praying for the wellbeing of refugees everywhere while drawing attention to who lives in one’s community, as well as sharing stories of resilience and spiritual journey.

The services also tell how local refugee and religious communities work to connect with one another through compassion, partnership, and religion, and how interfaith itself is a kind of civic participation and community building.

Take the case of the program in Milwaukee, held at the Lynden Sculpture Garden, in partnership with the Interfaith Conference of Greater Milwaukee. It was the fruit of a spontaneous partnership between the two organizations that connected interfaith leaders with refugee faith leaders who are a part of HOME, Lynden’s art program, which is refugee-directed. The Interfaith Conference has worked for 50 years to connect religiously diverse local communities, while Lynden is a public access arts center that, among other things, works to empower resettled refugees and marginalized communities through the arts through its HOME program.

“We had not worked from an interfaith perspective,” said Kim Khaira, HOME’s community engagement specialist, “and the service led us to find leaders within the communities that we did not know.” Cherrie Hanson, the Interfaith Conference’s Program Director felt the same way. The collaboration also introduced the Conference to new communities. The whole service was conducted by refugee religious prayer givers, demonstrating the full religious diversity of a global crisis and our nation's vibrant diversity and ability to share together. “We can talk about trauma,” Khaira adds, “but we can also celebrate and share relief through the arts.”

Prayer leaders included Pastor Stanley Cung from the Emmanuel Chin Baptist Church, Hasina Begum Ashraf Mia from the Muslim Rohingya community, and Fessahave Mebrathu, a Ge'ez Rite Catholic of Alexandrian Tradition from Eretria who was Milwaukee’s resettlement director for the Archdiocese and is currently the director for Black Catholics and Ethnic Minorities.

Partnerships between refugee initiatives and interfaith coalitions like the one in Milwaukee leads one to imagine the possibility of an interfaith refugee community that would by nature learn from one another and model care for those who share a particular global experience of suffering.

“Milwaukee is one of the most segregated cities in the country,” Khaira reflects, “and this makes our work with refugees especially important.”

Other connections were organized by Interfaith-RISE an independent resettlement site housed in a Dutch Reform Church in Central New Jersey. The service was conducted in partnership with the Catholic Charities Camden and with participation from the Archdiocese of Newark. Prayer givers included Rev. Muni, a Cambodian Buddhist monk and refugee, and Rita Wadhwani from the Sindhi Hindu community. Resettled in the early 1980s’ and late 1960’s, respectively, Cambodian and Sindhi refugees are often left outside of the current refugee narrative. “We work extensively across religious lines,” said Maya Wahrman, Interfaith Rise’s Reception & Placement Case Manager, “but as a fairly new resettlement office we had yet to make good connections to local refugee Hindu and Buddhist communities. The service gave us the opportunity to make new partners.” Wahrman and other organizers plan to meet with their new Sindhi friends to discuss future partnerships in the Global Grace Café and Marketplace, operated by refugees as a training and job placement program for new arrivals.

In Cleveland, the Diocesan Social Action Office Diocesan Social Action Office, the Migration and Refugee Services Office within Catholic Charities, and the Ecumenical & Interfaith office of the diocese created the service together. It was an opportunity to build support for a moral position that has had, until recently, clear bipartisan support, and continues to be, according to the Director of Social Action for South West Cleveland Paul Kipfstuhl. Mr. Kipfstuhl pointed to the recent interest in Medina, a conservative suburb of Cleveland, to resettle refugees.

In terms of the refugee service, “I thought it would be a hard sell,” said Kelly Davis, the Diocesan Director of Social Action at Cleveland Catholic Charities, “but when we reached out to the Methodist, Jewish, and Sunni and Shia Muslim participants, they all immediately said yes.” The Cleveland site will follow up by piloting a curriculum for high schools about refugee resettlement that helps local high schoolers see both the refugee communities around them as well as the role that their very own archdiocese has played in welcoming them as new Americans.

“As refugee resettlement became formalized in the post-World War II period, religious organizations played a critical role,” says Todd Scribner, Education Coordinator of the United States Conference of Catholic Bishops’ Migration and Refugee Services. “They advocated with Congress and Administrations to expand support for resettlement, helped build the infrastructure that supports refugees following their arrival, and provided a moral voice that called for increased protections for these vulnerable migrant populations.”

The role of Christian churches in both past and present is profound. After all, not only do the Hebrew Scriptures tell the Jewish people to care for the “alien” among us, but in the New Testament Jesus also commands his followers to care for the “stranger.”  Indeed, Jesus himself was, with Mary and Joseph, a refugee, during the “Flight into Egypt,” when the Holy Family had to feel the murderous King Herod.  Caring for migrants and refugees, even before those terms were invented, has been a constitutive part of the church’s care for those on the margins of our society.  Today Pope Francis asks Catholics to go to the “peripheries,” and it is here that we encounter the migrant, the refugee, and the internally displaced person.

These recent interfaith prayer services reveal how religious networks on the ground can partner with refugees in ways that empower, educate, and celebrate. And then the refugee becomes no longer a stranger but a beloved brother or sister. As we move toward National Migration Week (September 20-26, 2021) and the Vatican sponsored World Day of Migrants and Refugees (September 26), we will have another opportunity to focus our attention on the myriad of challenges confronting migrants around the globe and a chance to reflect on how we can create a more welcoming home to those who come here to the United States.

Fr. James Martin, SJ, is a Jesuit priest, editor at large of America magazine and author of the new book Learning to Pray. From 1992 to 1994 he worked with the Jesuit Refugee Service in Nairobi, Kenya.
Matthew Weiner is an Associate Dean in the Office of Religious Life at Princeton University, and the Principle Investigator (with Stanley N. Katz) of the Religion and Forced Migration Initiative.